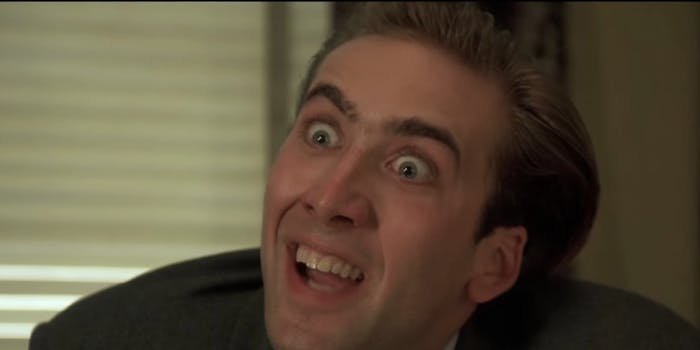 Does Cage believe all his movies are real life?

We watched him as he stole Cher’s heart in Moonstruck, stole a baby in Raising Arizona, and stole the Declaration of Independence in National Treasure. But did anybody ever stop to consider exactly why Cage was so convincing in his countless roles?

In the subreddit /r/WritingPrompts, one user imagines a world in which Nic Cage the actor doesn’t differentiate himself from Nic Cage the character.

“Nicolas Cage is completely unaware that he is an actor. All he knows is strange men with cameras follow him around while he gets into crazy situations and money shows up randomly in his bank account,” the prompt reads.

The top entry introduces the world to a Cage who simply does not know what a movie is.

I sat at my computer, typing away at the second volume of my memoirs when my phone rang.
“Hey Nic” said my agent
“Yeah”
“We have to talk about your book”
“What about it”
“Well…it would seem that you’re claiming it’s your memoir”
“Yeah”
“But nearly every event in the book, is a scene from one of your movies”
“What’s that?”
“I said but nearly every event in the book…”
“No I heard you. What’s a movie?”
“What’s a…what’s a…”
I heard my agent say ‘oh boy’
“Nic, do you know where the money in your bank account comes from?”
“That time I found the treasure?”
“No that was National Treasure”
“That time I found the answer to all those conspiracy theories”
“That was The Rock”
“That time…”
“Yeah I’m just going to nip this in the bud and say no”

But living a life inside of films leads to countless problems in Cage’s everyday life, including paranoia. Surely he can’t get away with all of his high-profile capers.

Day 13990: Found a whole bunch of clues, no treasure yet. Long story short, the clues led me to Washington D.C. and now I stole the Declaration of Independence. Not a big problem since I got away with it, except whaddaya know! Those camera guys caught it all on film! Literally! Every minute of it! I’m done for!

Of course, you can’t expect Cage’s mental health to remain intact going to hell and back so many times.

“I loved you in Ghost Rider!”, she said.
Impossible I thought. “You know I am the rider?”, I shouted. “Look into my eyes.”, as I hold her by the shoulders. “Your soul is pure, so I will spare you. But you must come with me. Dark forces are after you.”

Naturally, every party will have its pooper.

I get the idea but it seems a bit unrealistic. This is just my opinion, and this is a really good post but is it realistic that anyone would believe something like that blindly? I know for one that my first response would be “stop pulling my leg.”

But what if this were real, what if Nic Cage wasn’t acting? What if those were, in fact, real bees?