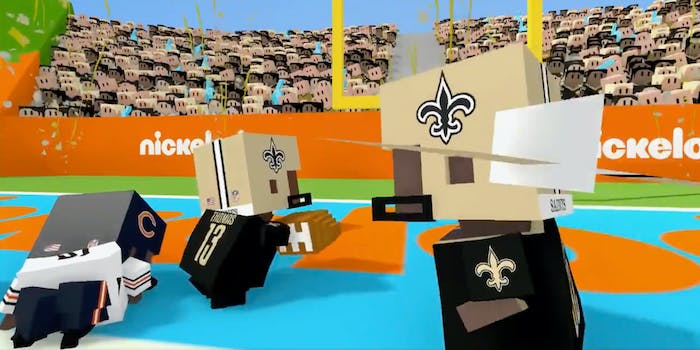 The NFL aired a playoff game on Nickelodeon. It was as silly and great as you’d expect

There were plenty of highlights in the first round of the NFL post-season over the weekend (including the Cleveland Browns winning over the Pittsburgh Steelers), but the strangest and perhaps the most delightful outing of the Super Wild Card weekend played out in the unlikeliest of places: Nickelodeon.

The NFL first announced back in December that CBS Sports and Nickelodeon (which are both owned by ViacomCBS) would team up for the NFL Wild Card game on Jan. 10, which promised to “feature one-of-a-kind kid-focused content and Nick-themed elements throughout” and would include Nickelodeon stars along with CBS presenters and NFL players. Both the NFL and ViacomCBS framed the event as an opportunity for kids and their parents to be able to watch the game together.

“Our game plan is to make sure the NFL Wild Card Game on Nickelodeon definitely lives up to its name by infusing the telecast with Nick’s sensibility of surprise and fun at almost every turn,” Brian Robbins, President of ViacomCBS Kids & Family Entertainment, said in a statement. “We’re incredibly proud to team up with CBS Sports and the NFL to elevate the thrill of this game for kids and families to enjoy together.”

It’s the kind of announcement that could’ve gone unnoticed or forgotten by some casual football fans at the time. But it all resurfaced on Sunday when people who wanted to watch Sunday’s matchup between the Chicago Bears and the New Orleans Saints could tune in to Nickelodeon to watch it.

And what did that look like? A lot of googly eyes, a visualization of SpongeBob SquarePants to mark the field goal posts, Young Sheldon’s Iain Armitage explaining different football terms, and block animation.

And, for anyone who grew up watching Nickelodeon, that also meant a lot of slime. Not only did slime cannons become part of each touchdown celebration courtesy of a visual effect, but Saints head coach Sean Payton also kept his promise to be slimed if his team won the matchup.

While the Saints may have won the matchup, Bears quarterback Mitch Trubisky was named the game’s “NVP.”

But even Nickelodeon couldn’t produce all of the chaos ahead of time. Despite its attempt to make Sunday’s game family-friendly, a hot mic catching a player uttering “fuck” made its way onto the air.

Nickelodeon’s version of Sunday’s wildcard game was chaotic and silly as it straddled the line between its nostalgia-heavy millennial audience who grew up on ’90s Nickelodeon and the people who may have been watching a football game for the first time. It offered the kind of commentary that didn’t alienate its audience and offered to explain certain football jargon without putting down that casual audience. But also, it didn’t take itself too seriously.

Then again, given that one of the all-time halftime performances came from SpongeBob SquarePants, maybe we shouldn’t be surprised that Nickelodeon nailed it.

Can we get more NFL games on Nick?