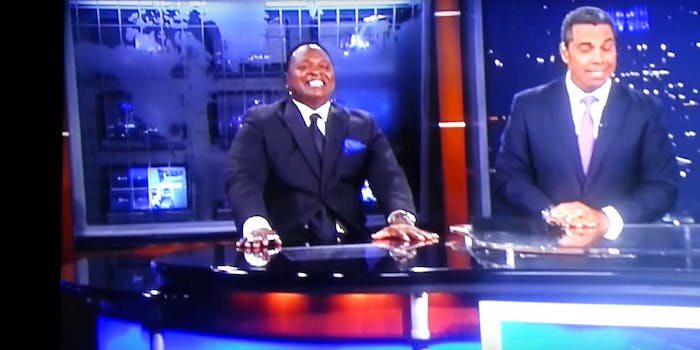 News anchor cracks up when his colleague ‘discovers’ N.W.A.

Straight Outta Compton may have opened on Friday, but this news anchor is straight outta chill.

While discussing the movie on KCRA News, anchor Mark Finan admitted that he didn’t know what “N.W.A.” stood for. But according to his trusty weather dictionary, it means “Nice morning, warmer, and it’s Friday.” That’s when Del Rogers couldn’t keep it together.

For those of you who might not know, N.W.A. stands for Ni**az Wit Attitudes, one of the most iconic hip-hop groups. Was Finan being serious? Hopefully not. But we can’t tell if Rogers is cracking up because he actually thinks Finan’s joke is funny or he just can’t deal with how white his co-anchor is. I’m putting my money on the latter.

News anchors really are a gift from the heavens.