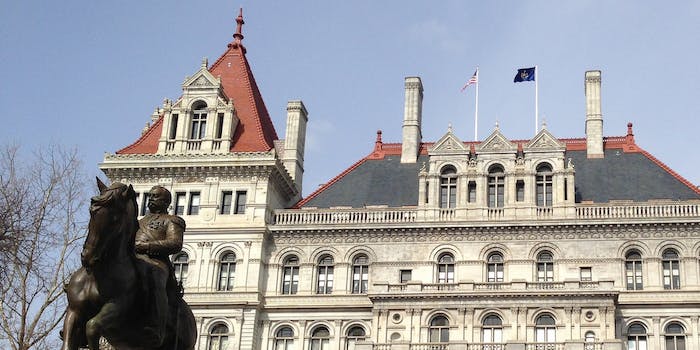 State lawmakers will pursue a bill more comprehensive than California's.

Never let it be said that New Jersey can’t set a good example. The state was the first to enact a law punishing the dissemination of “revenge porn”—nudes and other compromising photos posted online without the subject’s consent—and was this week followed by California.

“As the social media phenomenon grows, more and more women are being violated and exploited by their ex-boyfriends and husbands,” Boyle said, according to the Daily News. “These private images go viral to the world and women have little or no legal recourse.”

New York state senator Joseph A. Griffo and Assemblyman Edward C. Braunstein are also behind the proposed legislation, which would make “the non-consensual disclosure of sexually explicit images a class A misdemeanor” worth a year in prison and/or $30,000 fine, Time reported.

Victims in California are only protected against the distribution of photos they did not take themselves. Obviously, in the world of nude pics, the naughty selfie is much more prominent than the amateur model shoot—and lawmakers in the Empire State seem disinclined to allow such a loophole.

“This so-called phenomena of ‘cyber-revenge,’ is a tawdry form of exploitation,” said Senator Griffo in a statement. “From what we know, the majority of its victims are women who don’t know that their images and likenesses has been bartered and sold over the internet,” he said. “New Jersey and California have laws addressing this problem, we’re advocating that New York should be the third.”

Only forty-seven more to go!