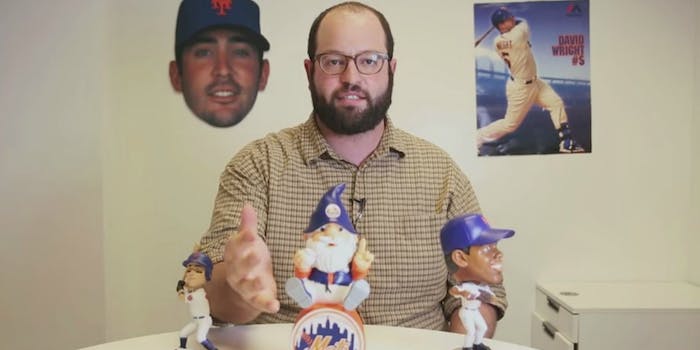 This will surely fail.

The New York Mets sit in second place in the National League East, three games back of the first-place Washington Nationals and three games behind in the wild card race. One enterprising man wants to push New York over the top, and he wants your contributions as well.

That’s why a Mets fan named Etan Bednarsh started a GoFundMe page that looks to raise $3 million to acquire a hitter for the middle of the Mets batting order.

Here’s why he’s taken such a drastic step.

It’s easy to understand Etan’s idea. The Mets are the worst-hitting team in all of baseball (with a paltry .233 batting average) with the worst slugging percentage, the third-worst on-base percentage, and the second-fewest runs scored. So yeah, New York — which has great pitching with the likes of Matt Harvey, Jacob deGrom, and Noah Syndergaard, all of whom Etan calls “innocent and pure souls” who “don’t deserve this”— could use some help on offense.

Etan laments the fact that the ownership group was caught in the web of Bernie Madoff’s Ponzi scheme and the report that the organization isn’t sure it wants to spend a couple million in order to procure the man that might lift it to the playoffs.

Ben Zobrist is owed about 2-3 million rest of year, and according to Eddie Coleman, #mets hesitant to pay that. Says it all, if true.

But even if his venture fails—and it surely will fail—it’s doubtful Etan will be sidetracked into despair.

“The Mets have become like an aging parent,” he said in the video. “They need me more than I need them. And I need you to help them.  … Let’s raise $3 million. If Mets owners can’t do it, Mets fans can.”