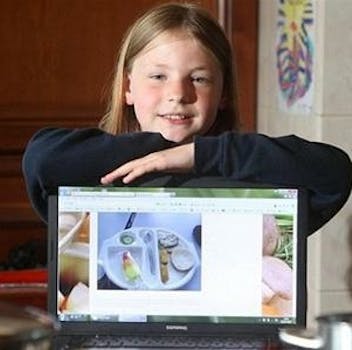 The NeverSeconds blog strikes another blow for children's health.

Over the last six weeks, Martha Payne’s blog has received international attention and support from well-known chefs like Jamie Oliver. Her mission to chronicle her school lunches hit a temporary barrier when she was told she can no longer take photos.

In a post on NeverSeconds titled “Goodbye,” the 9-year-old Scot (who uses the pseudonym “Veg”) explained that she was pulled into the head teacher’s office Thursday and informed that she is not allowed to snap images of the meals after a newspaper report led to catering staff fearing for their jobs.

Thankfully, the Argyle and Bute Council, the local government that originally ordered the ban, quickly backtracked on it after pressure from citizens of the Web.

“There is no place for censorship in Argyll and Bute Council. There never has been and there never will be,” council leader Roddy McCuish told BBC Radio 4’s World at One show Friday afternoon. “I have just instructed senior officials to immediately withdraw the ban on photos from the school dining hall.”

The online rally against the ban included more than 15,000 tweets by Friday morning under the #neverseconds hashtag banner. Oliver was among those pledging support for Martha, tweeting “Stay strong Martha, RT this to show your support #neverseconds” with a link to the schoolgirl’s last blog post.

The initial decision almost marked a disappointing end for the blog, begun as a writing project between Martha and her father David. However, Martha’s efforts led to the introduction of healthier lunch options to replace the previous, woeful offerings at her school.

All the attention surrounding the ban had a massive impact on the Paynes’ charity fundraising drive. Earlier this month, Martha and David started a campaign to raise funds for Mary’s Meals, a charity providing meals to youngsters in Third World countries.

At the time of the ban, around £2,000 had been raised. In Thursday’s blog post, which has now received more than 1,200 comments, Martha wrote, “I don’t think I will be able to finish raising enough money for a kitchen for Mary’s Meals either.”

That disappointment proved premature, however. Kind-hearted supporters helped Martha smash through her £7,000 target, raising more than £28,000 so far from around 2,000 people at the time of publication. That’s enough to build four school kitchens in Malawi.