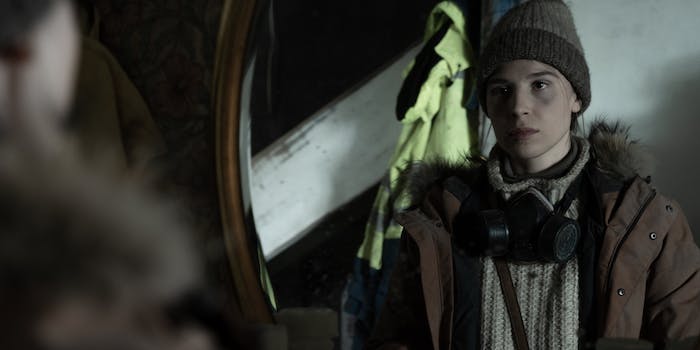 This supernatural mystery takes place in a remote Icelandic village, overshadowed by an active volcano.

Vik is a small village on the South coast of Iceland, home to a couple of hundred people. Sandwiched between the ocean and a massive volcano named Katla, it’s a picturesque but perilous place to live. In Netflix’s new Icelandic miniseries Katla, that volcano has been erupting steadily for a full year, filling the air with ash and forcing most of the locals to evacuate. Only a skeleton crew remain, manning the emergency services and a couple of local businesses.

This ominous atmosphere is exacerbated by two troubling events: the disappearance of a young woman last year (Ása, played by Íris Tanja Flygenring) and the appearance of another: Gunhild (Aliette Opheim), who emerges naked from a glacier in episode 1. Caked in volcanic ash and confused about how she got there, Gunhild is the latest sign that something is very, very wrong in Vik.

Created by Sigurjón Kjartansson and Baltasar Kormákur (who previously made the acclaimed crime drama Trapped), Katla is Netflix’s first Icelandic show. Reveling in the bleak beauty of Vik’s dramatic landscape, it offers up an ominous supernatural mystery. Guðrún Ýr Eyfjörð leads an impressive ensemble cast as Grima, sister of the missing woman Ása. Grima should have left town months ago, but she can’t seem to let go. A common theme among Vik’s inhabitants, because only the truly desperate and dedicated would stick around under these gloomy circumstances.

Blending Icelandic folklore with the tension of Scandinavian noir, Katla mostly avoids tropey storytelling. This encourages a more realistic small-town drama vibe for an otherwise wild conceit: Gunhild, the mysterious woman who arrives in episode 1, is a perfect doppelganger for a Swedish woman who lived in Katla 20 years ago. She hasn’t aged a day. As genre-savvy viewers, we quickly understand that something magical is afoot, bringing to mind legends of changelings and evil twins. But the occupants of Vik are slow on the uptake.

As a TV critic, I spend far too much time complaining about clumsy and unnecessary exposition. Katla is free from this problem, but may actually go too far in the other direction. It really does feel like the characters should ask more questions about their bizarre experiences. For instance, why does it take so long for anyone to acknowledge the reality Gunhild being a creepy doppelgänger? In their defence, no one wants to be the “is magic real?” guy. People don’t want to upend their view of what is and isn’t possible. But to an audience who is used to seeing sci-fi/horror characters accept the impossible at face value, this slow burn can be a little frustrating at times. It is, however, a minor quibble in an otherwise well-conceived show.

With gorgeous locations and an intriguing cast of characters, Katla will appeal to several overlapping audiences. There’s an obvious underlying anxiety about climate change here, echoing the glacial threat of Fortitude, another Scandinavian drama about something dangerous emerging from the ice. Likewise, the main conceit is somewhat similar to The Thing. Overall, Katla operates like a small-town murder mystery without the actual murder, putting the village’s one police officer (an incompetent old man) in an ineffectual supporting role. An appealing choice for people who enjoy dark and enigmatic storytelling but are less interested in violence and cops.

Katla is now streaming on Netflix.