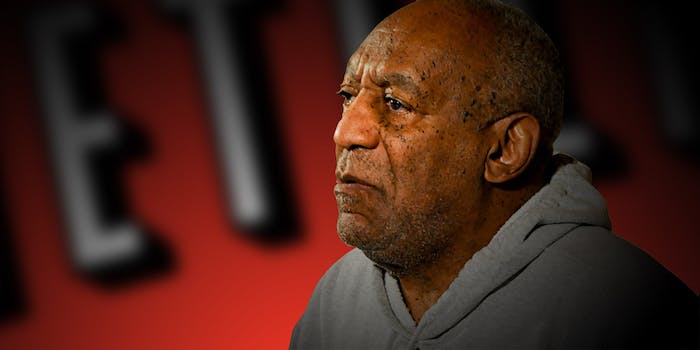 The storm around the comic shows no signs of abating.

The video-streaming service was preparing to launch “Bill Cosby 77” on Nov. 28 to celebrate Cosby’s 77th birthday. Following new accusations of sexual assault from model and television host Janice Dickinson and two other women, however, Netflix decided to “postpone” the comedy special.

“At this time we are postponing the launch of the new stand up comedy special ‘Bill Cosby 77,’” a Netflix spokesperson said.

Dickinson came forward on Tuesday night in an interview with Entertainment Tonight, claiming that the comedian had raped her 30 years ago. Explaining her decision to speak out, she said that she’s “doing this because it’s the right thing to do and this happened to me and it’s a true story.”

Fourteen different women have accused Cosby of rape, although he has not been charged in any of these cases.

As the storm of allegations has grown, Cosby has remained almost totally silent. In an NPR interview he refused to answer any questions relating to the claims, and a statement issued via his lawyer said that “Mr. Cosby does not intend to dignify these allegations with any comment. He would like to thank all his fans for the outpouring of support and assure them that, at age 77, he is doing his best work.”

Variety reports the NBC is currently refusing to comment on the status of a planned comedy program starring Cosby. In light of the growing firestorm surrounding the comic, however, that show’s future appears doubtful.

In 2006, Cosby settled a civil case with a woman over an alleged attack, but he has not been criminally charged in any case, the Guardian reports.

H/T Variety | Photo via The World Affairs Council/Flickr (CC BY 2.0)