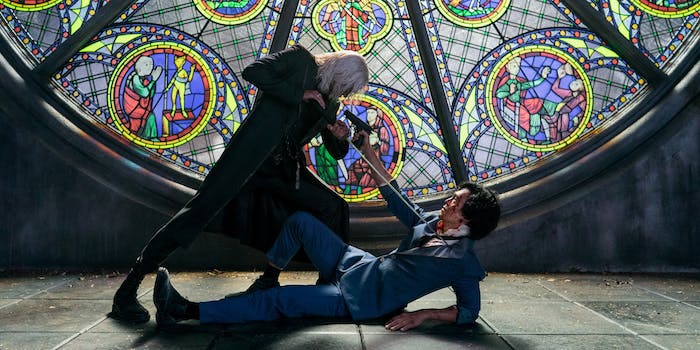 The credits are a shot-for-shot remake of the original. But is that a good thing?

Netflix‘s live-action Cowboy Bebop was always going to be divisive. The original 1998 anime is a cult classic; one of the first adult anime shows to really breakthrough in the West. And since Hollywood has a dubious history with live-action adaptations, a lot of fans simply don’t want this remake to exist.

With an ensemble cast led by John Cho as the bounty hunter Spike Spiegel, Netflix’s Cowboy Bebop involves the original show’s director Shinichirō Watanabe as a consultant and will feature new music by Yoko Kanno—an iconic element of the anime. Netflix is keen to promote this as a faithful adaptation, replicating the tone and aesthetic of the original. But when Netflix released the new title sequence—almost a shot-for-shot remake of the original—it opened up another side to the remake debate. Namely, what’s the point in making such a direct adaptation? And does it invite unflattering comparisons between live-action and the unique qualities of animation?

Plenty of fans were excited by the credits sequence, reassured that Netflix stuck close to the source material. But the more negative response echoes a familiar refrain among critics of live-action Disney remakes like Aladdin and Beauty and the Beast. Animation and live-action are fundamentally different mediums, and the strengths of one format can’t be recreated by the other.

One of the most widely shared responses criticized Netflix’s side-by-side comparison of the two credits sequences. In the original, Spike’s exaggerated design is full of energy, whereas an image of John Cho running just doesn’t have the same effect. Another fan pointed out that the show’s posters give the characters completely static body language, removing the visual impact of the anime characterization.

Essentially, some live-action remakes try to make a realistic copy of something that is not, in fact, “real.” This is usually a bad idea. Animated media tends to rely upon stylized imagery, simplified lighting, exaggerated facial expressions, and action that defies the laws of physics. That’s why films like Hollywood’s Ghost in the Shell (and Disney’s live-action remakes) look flat and boring compared to their source material. You literally can’t recreate something like Spike Spiegel’s run in live-action.

This recurring criticism is partly because live-action remakes often suck, and partly a matter of audience taste. Japanese audiences are used to seeing live-action adaptations of anime and manga, and there’s less stigma attached to something like the Death Note movies. But Western anime fans are more resistant to live-action remakes, soured by bad experiences like Dragonball: Evolution—and rebelling against the mainstream belief that live-action is somehow a superior medium. Oddly enough, Western audiences don’t care so much about the stylistic gulf between superhero movies and superhero comics—even though the MCU invites the same aesthetic criticisms as the live-action Cowboy Bebop.

Despite these polarized reactions to the Cowboy Bebop credits, this remake may be very different from what fans are envisioning. The original series consisted of 26 largely standalone episodes, each about 20 minutes long. However, the remake will feature hour-long episodes, expanding the cast and telling a more serialized narrative. So while the promotional materials emphasize familiar imagery, the show itself will introduce new material in a more traditional American TV format. Make of that what you will.