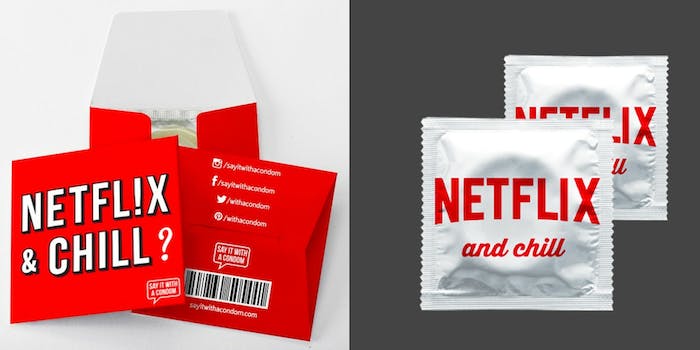 Finally, you can order some Netflix and Chill condoms

Why not Netflix and Pill?

It is the tale of two condoms, both alike in meme. In the land of the Internet, where we lay the scene, both promise to contain that sweet man cream. Both are Netflix-and-Chill-themed, we glean.

There’s just something so poetic about meme-inspired condoms that they actually have me inspired. But yes, fans of making moves while streaming episodes of BoJack Horseman can now order some chill-tastic contraceptives from not just one but two different entrepreneurial outlets seeking to commercialize the meme. Thank god for the free market.

Say It With a Condom, a company that prints all sorts of different designs and packages for the rubbers, has unveiled the “Netfl!x And Chill Condom.“ Say It With a Condom

According to the product’s description, the company just “couldn’t resist joining in on the fun” by borrowing 2015’s definitive hookup slang. But they’re also FDA-approved and have a four-to-five-year shelf life.Meanwhile, “poor college students at UT Austin” are also offering meme-inspired banana wrappers; theirs is the “NF and chill condom,” which they’re promoting as “the definitive Netflix and Chill Condom.” Their website is a bit more chic than Say It With a Condom’s, presenting some classy sexy-time photos of people who look like they’ve just turned off House of Cards and are starting to get it on. The condoms themselves even have the “and chill” part printed in a typeface that has a little bit of swagger to it, making them more elegant (in my eyes) than the other Netflix and Chill condoms. There’s even this hilarious product description:

I mean just look at this fkin condom m8, guaranteed if you whip one of these honeys out and you’re actually at a netflix and chill outing with your partner, you’re gonna get laid. With a functional 3D-printed steel frame and a built-in cable lock and lighting, the NF and Chill condom is the only condom you’ll need to be a douchebag millenial.

Oh, and enjoy this gimmick while you can, because “Netflix and Chill” has jumped the shark—though it seems these condoms never got the memo.

Photos courtesy of nfandchill and sayitwithacondom | Remix by Gabe Bergado