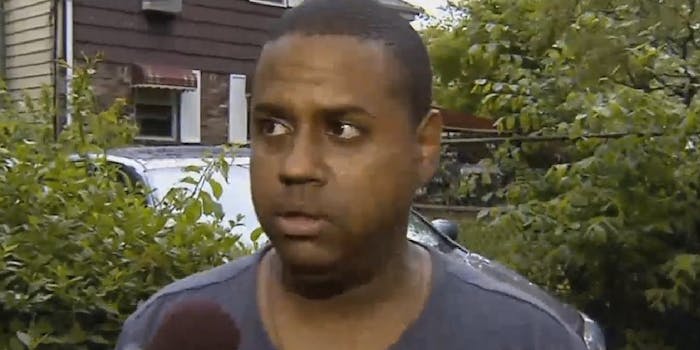 “I’m a National Socialist! What you guys call a Nazi! I am! I’m a believer of it!”

Gabriel Diaz, 26, a New York City cabbie, was suspended by the Taxi and Limousine Commission for wearing a swastika armband while driving. But in an interview with CBS, Diaz said he did nazi the discipline coming.

Diaz, a Bronx native, had multiple photos of him wearing the armband sent to the Anti-Defamation League and the TLC. He would wear it on his left arm so passersby would easily spot it.

After an investigation, the cabbie was suspended for 30 days.

He explained his affiliation in more detail, and volume: “I’m a National Socialist! What you guys call a Nazi! I am! I’m a believer of it!”

Diaz said he knew the symbol would offend some people, but he denies being anti-Semitic. He doesn’t hate Jews, he said—he’s just critical of them. “That doesn’t make me a hater. Who says you have to be white to be a National Socialist? It could be anybody.”

“I have no comment on that right now,” said Diaz.

The whole interview is filled with gems like this. Watch it below.

It’s not illegal to wear a swastika armband in public, but it is against TLC rules to sport Nazi symbols while driving a cab. Diaz’s suspension was handed down for “acting against the best interest of the public.”

Evan Bernstein of the Anti-Defamation League applauded the TLC for its quick action. It was “really appropriate and expedient,” he told CBS.

“Hopefully [Diaz] realizes this is wrong. Hopefully he learns from this mistake.”

Diaz said he would refrain from wearing his armband while driving, but he couldn’t resist giving CBS several more remarks “about gays and Muslims.”