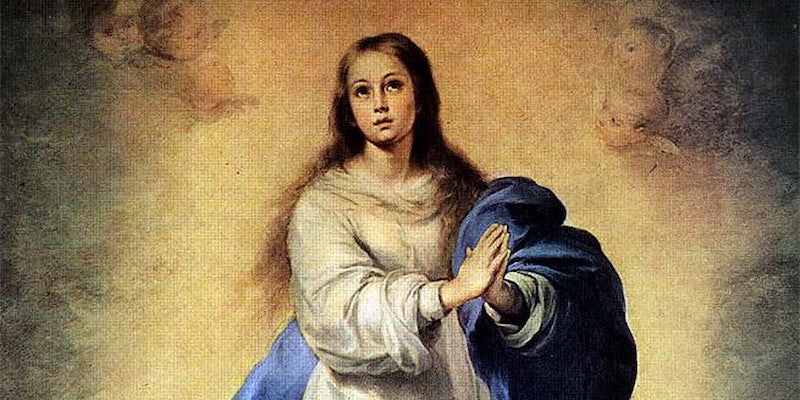 Another comically bad restoration of a Spanish painting inspires memes

This copy of 'The Immaculate Conception of El Escorial' looks...different.

A copy of Baroque artist Bartolomé Esteban Murillo’s famous painting, The Immaculate Conception of El Escorial, has been subjected to a horrifically botched restoration attempt in the tradition of the much-memed Ecce Homo “Potato Jesus” fresco. This third high-profile case in recent years of Spanish artworks nearly being destroyed due to an amateur attempt at restoration has conservation experts in Spain calling for tighter regulations governing the practice.

Though English-language news agencies, including the BBC, reported that the original painting had been subjected to the botched restoration attempt, the original is still safely in the Museo Del Prado in Madrid. However, the damaged copy, which belongs to a private collector in Valencia, was still valuable in its own right—and the damage done demonstrates the risks faced by Spain’s cultural heritage due to the lack of regulation in the conservation field.

Currently, Spain has no regulations governing who can undertake restoration work, allowing people who are completely untrained to operate in the field. While the owners of a work deemed to be an important piece of cultural heritage are obliged to inform the government before any modifications or repairs are made to it, that’s as far as the laws go, and the handling of the repairs is left entirely at the owner’s discretion. In recent years there has also been a mass exodus of properly trained conservation professionals in Spain, both from the field and from the country itself, due to the resulting lack of job opportunities.

The owner of the damaged copy paid a company that handles furniture restoration €1,200 to clean the painting, which somehow managed to seriously damage the Virgin Mary’s face in the process. A repair attempt by the same company only managed to compound the damage. Although he has now hired an appropriately trained professional, it remains to be seen whether or not a full restoration is possible.

Speaking to The Guardian, Fernando Carrera, a professor at The Galician School for the Conservation and Restoration of Cultural Heritage and former president of Spain’s Professional Association of Restorers and Conservators (Acre), compared the current system to the provision of medical care without a license. He went on to say that this kind of destruction was a recurring problem in Spain:

“Paradoxically, it shows just how important professional restorers are. We need to invest in our heritage, but even before we talk about money, we need to make sure that the people who undertake this kind of work have been trained in it.”

María Borja, one of the current Acre vice-presidents, said that only a handful of cases like this make it into the media, and they’re much more common than people think. She too called for regulatory changes to prevent more cases of damage to priceless artefacts, adding that this change is one of Acre’s primary goals.

Acre went on to put out a statement asking people not to use the term restoration when reporting on incidents like this, saying that it was more properly termed “vandalism”. Their statement also called for better regulations on restoration work, adding that the formal profession was on the verge of dying put in Spain due the unregulated nature of the field, and that this all posed a serious risk to Spain’s cultural heritage.

Meanwhile, people on Twitter are busy memeing the disastrous repair attempt, just as they did with Potato Jesus and Playmobile Saint George before it, with even the British Royal Academy getting involved.