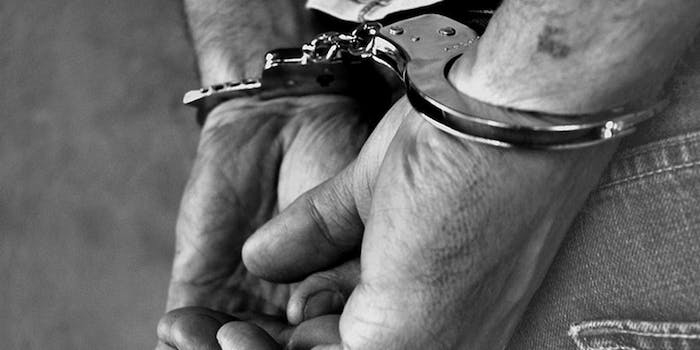 Michael Goodman was apparently browsing the comments on a post about a local bagel place closing when he came across a familiar name.

Thirty years after stealing a bus pass from an unsuspecting mark outside the New York City Museum of Natural History, a crook has used Facebook to make amends with his mugging victim.

Michael Goodman, 53, was apparently browsing the comments on a post about a local bagel place closing when he came across a familiar name: Claude Soffel, who instantly recognized as the man he robbed 35 years ago.

“You may not remember this,” Goodman’s message to Soffel begins, “but a long time ago I walked up the steps of the Museum of Natural History one afternoon trying to look like a tough guy to [somebody] & saw you standing there on the steps.” 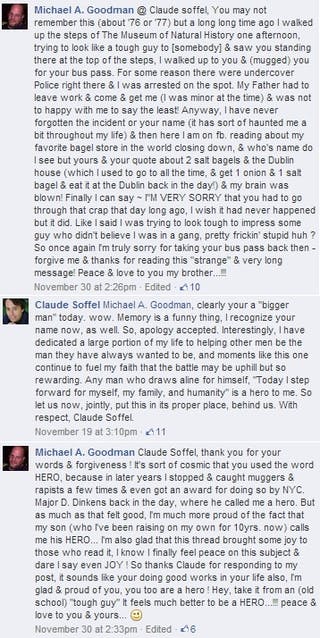 Goodman goes on to describe how he forcibly took Soffel’s bus pass before instantly being caught by nearby undercover police officers. Goodman said the incident was a major embarrassment—a failed effort to convince a classmate that he was in a gang. Ever since, the mugging has been a source of guilt weighing on his conscious.

“Finally I can say ~ I’M VERY SORRY that you had to go through that crap that day long ago,” Goodman wrote.

Goodman’s apology was met with equal graciousness from Soffel. Now a life coach, he praised Goodman for his personal growth.

He added, “I have dedicated a large portion of my life to helping other men be the m[e]n they have always wanted to be, and moments like this one continue to fuel my faith that the battle may be uphill but so rewarding.”

Goodman’s stick-up attempt on the museum steps appears to be the beginning and end of his life in crime. The New York Post reports that Goodman was sentenced to three weeks of community service removing graffiti for his attempted mugging. Afterwards, he went on to perform a number of good deeds. While working as a doorman, he reportedly captured a man trying to attack a woman near his building, an action for which he received a thank-you note from former New York City Mayor David Dinkins. Goodman now lives with his 13-year-old son in Hawaii.

“A very large weight has been lifted off my shoulder,” Goodman told the Post. “I feel peace and dare I say joy. I’m even happier this is bringing joy to other people.”