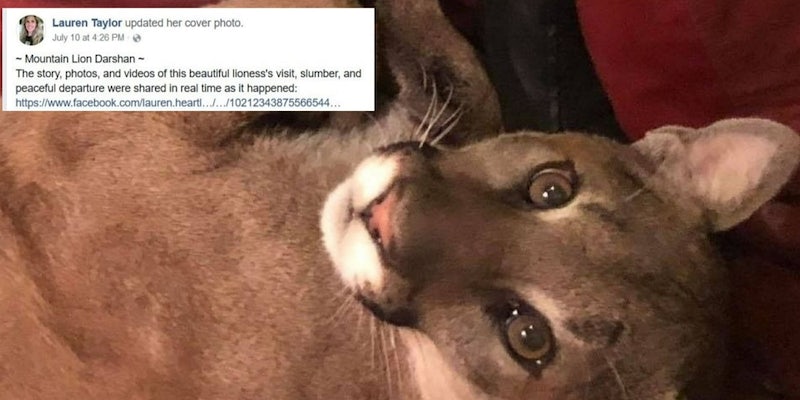 She said she used ‘feline-speak eye blinking’ to communicate.

What would you do if a mountain lion sought refuge in your living room? If you’re Facebook user Lauren Taylor, you apparently use telepathy to calm down the animal and make sure it has a comfy place to take a nap.

Earlier this month, while apparently trying to seek refuge from wildfires in Oregon, a mountain lion entered Taylor’s home after drinking from her fountain outside of her back door. According to Taylor, the cat tried to leave through a closed window after somebody in the house screamed and then hid behind the sofa.

But instead of trying to shoo the animal outside—or running, hiding, and calling the cops on the potentially dangerous animal—Taylor said she had a better idea: try to communicate with it on a telepathic level. Wrote Taylor on her Facebook post:

Cats are extremely psychic and perceptive of energy and this lion could have been dangerous in an energy field of fear or anger. In fact, before I consciously elevated the energy field and entrained her to a theta state, a housemate had shouted and slammed a door upon seeing her and the lion was frightened, agitated, and determined to exit through a closed window. Once the energy shifted, she calmed down.

When she was so quiet and it was obvious from the position of her feet on the wall that she was laying down, I went outside to see through the window what she was doing. She was sleeping! When I made noise, she woke up and looked startled so I consciously raised my frequency, gazed lovingly into her eyes, and communicated using feline-speak eye blinking to calm her. It was amazing to realize that this worked. I gazed lovingly then blinked hard and then she did it back! Then, she went back to sleep.

This video taken by Taylor seems to show a sleepy mountain lion enjoying some rest time.

When the animal woke up, Taylor wrote that “I again connected in a loving way,” and communicated to the animal through blinking. The animal, then, returned to her slumber. Taylor wrote that the lion slept behind the sofa for more than six hours. Here’s how Taylor said she got the mountain lion to exit the house.

Wrote Taylor: “It was just a couple hours to dawn and we needed to prompt her to leave without alarming her so much that she panicked. I sent telepathic pictures of the routes out of the house via open doors and the route out the backyard, across the creek, through an open field, and back up into the hills. We got guidance that the way to rouse her and get her to leave her safe spot behind the sofa without panicking was through drumming. We called in native ancestors’ support and started drumming. She roused and knew just what to do…. walking out through the open doors, through the yard, across the creek, and through the empty field behind us exactly as we had shown her.”

Taylor wrote she’s confident the mountain lion won’t be back and “it was a perfect ending to a blessed encounter that could have been dangerous if approached from a lower frequency.”

Read Taylor’s entire post here (and make sure not to invite any mountain lions into your home if you can help it).

This is wild. There’s a mountain lion in our living room. Loving her to peace so she’ll go out safely.Update: (Spoiler…