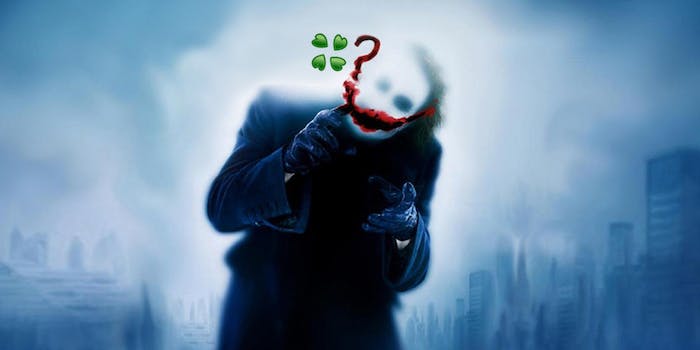 The most obsessive user in 4chan history

On Monday, the most disturbing thing on 4chan wasn’t a picture of a dead baby. Meet "the archiver."

On Monday, the most disturbing thing in 4chan’s 10-year history was posted to the site, and it wasn’t a picture of a dead baby.

It was a 97-page research document that could keep The Dark Knight’s Joker up at night in a cold sweat. A document so unnerving that it will go down as the greatest ruse of all time or the most profound slip into insanity ever witnessed online.

The name of the document is “The Philmarilion,” and its story begins on 4chan’s sports board, /sp/, a place filled with lighthearted discussions on who will be this season’s NFL MVP and why athletes don’t train with weighted clothing. One of /sp/’s most active users was UTV. Not much is known about UTV because, unlike Reddit and Twitter for example, 4chan doesn’t have an archive or a login system. Yet from the breadcrumbs collected on third-party archiving sites, UTV is an Englishman who follows the Premier League, is fan of Aston Villa striker Christian Benteke, and hates Manchester City. He also enjoys racial humor. In other words, UTV is not much different from your ordinary sports fan. Only he has a secret admirer of his own.

This fan goes by “the archiver.” Since June, he’s been following UTV’s every online move, commenting in his threads, and summarizing his activities with journal-like precision. 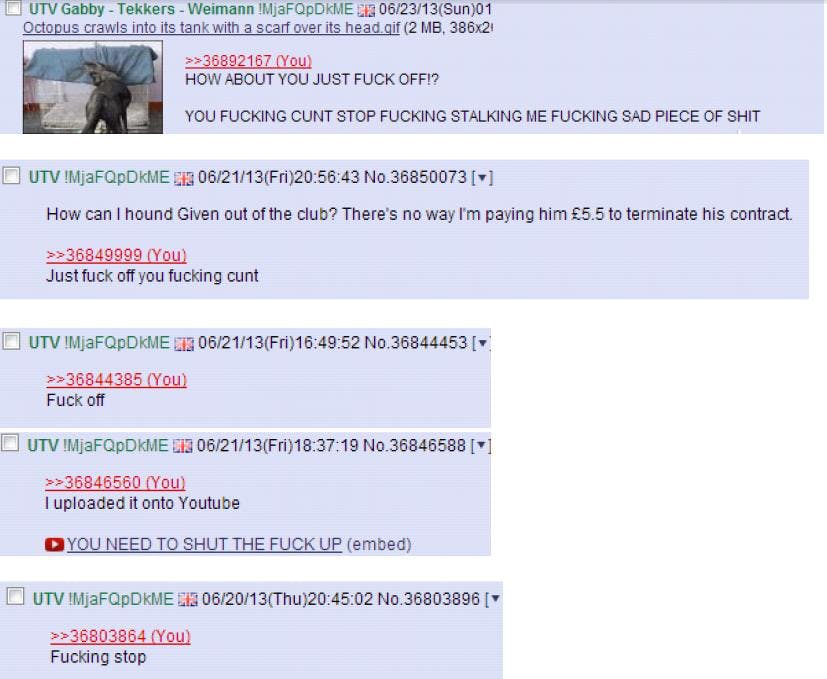 “[S]ometimes it is impossible to resist speaking to him, he is a naked woman and I must have a peek,” the archiver explained. “As you can see, his responses to me are generally good natured ‘banter’ with humorous intention that show the sweet, tender relationship that we share together.”

The more UTV lashed out against the archiver, the more his descent into madness accelerated.

On July 1, the archiver began counting how many posts UTV made a day, logging them all in the The Philmarilion. By the end of the month he had tallied 1,472 entries. This meticulous bookkeeping continued over the next two months as the archiver’s obsession evolved. He began composing poems and song parodies based off of UTV’s interests. They totaled eight pages. 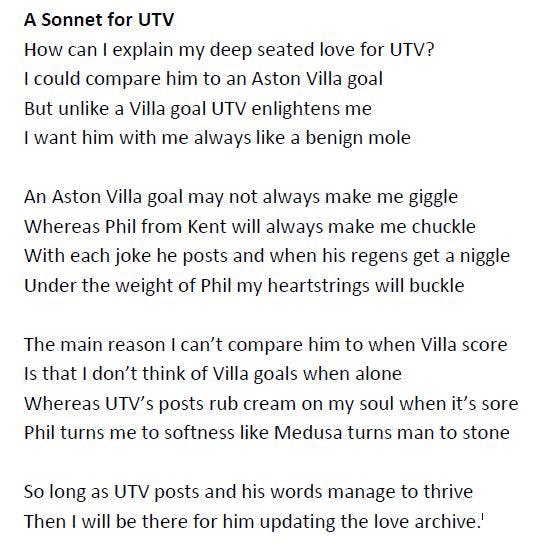 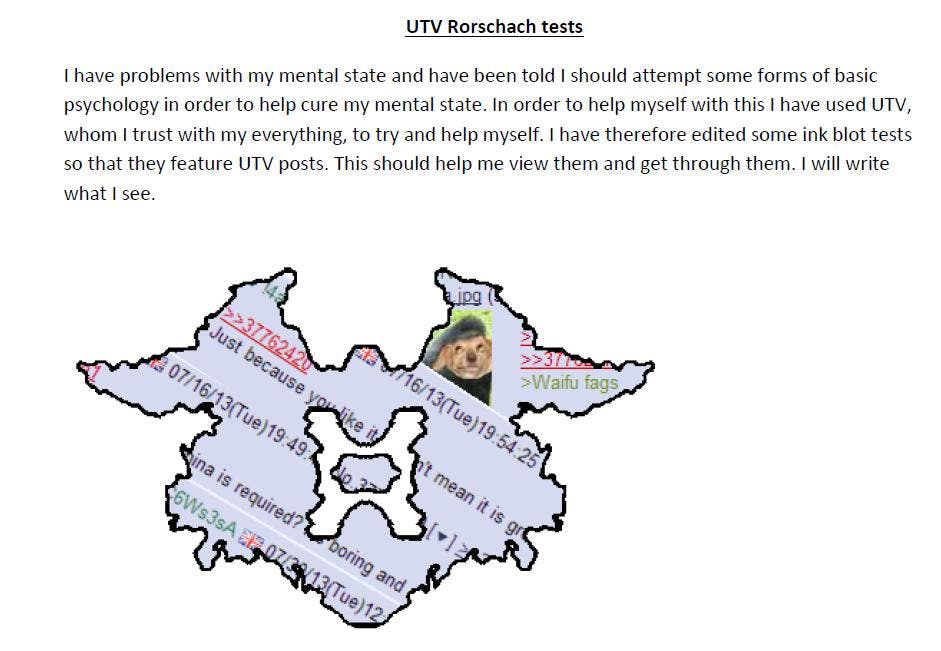 Then the archiver began planning.

What would a comedy roast of UTV look like? What about their home together? Or UTV’s funeral? The archiver not only had detailed answers for each of these questions, he had illustrations.

“One day I wish to meet UTV in person. As such, I think it would make sense to plan the layout for our home when we eventually do. We would probably live in an apartment at first, with UTV working and me staying home to continue my archiving and writings about him and looking after our pet annoyed cat. This is a plan for a seven room apartment that we could potentially share.” 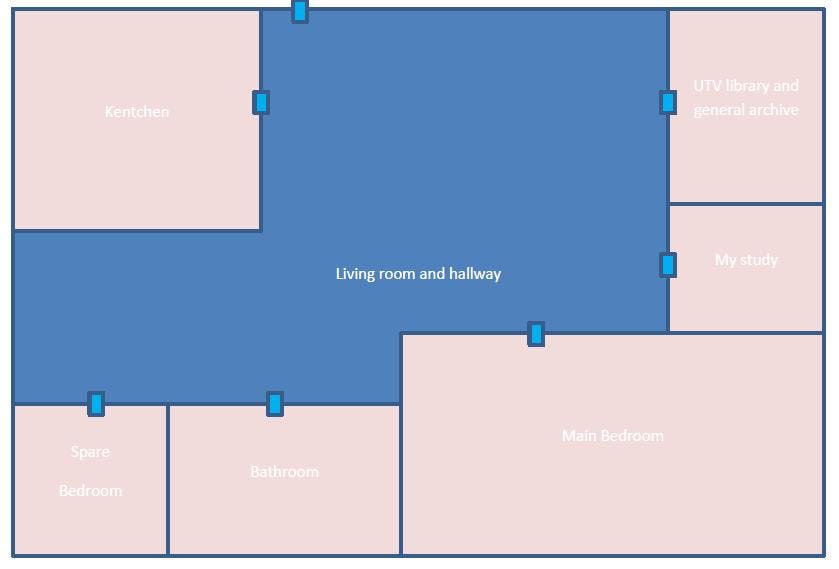 “I am well aware that one UTV may die. I do not want it to happen and this page should not be interpreted as that possibility, but I believe he is slightly older than me and I have no visions where I am no longer by his side, so whether he dies in 60 years or 60 minutes, from old age or alcohol poisoning celebrating a Villa title win, whichever comes first, I am going to ensure that I plan his funeral.” 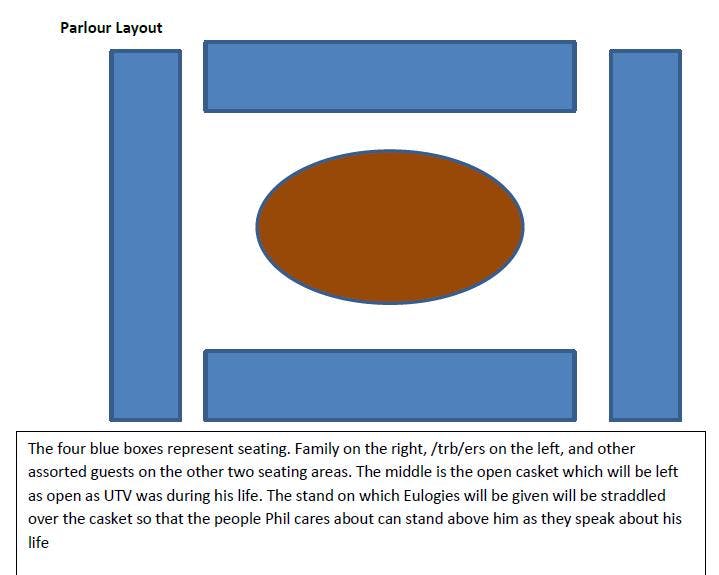 By September, the archiver became unhinged. To make himself “feel closer to UTV,” he began creating little to-do lists for him to complete and labelling food in his refrigerator with Sticky Notes. He also turned into an inventor. Using paper, scissors, and tape, the archiver created the “UTV hater doormat,” which was an ordinary welcome mat with /sp/ posts from UTV haters attached to it. The archiver also created the UTV belt, the opposite of the hater doormat.

“When I have to go out and miss UTV I always want to read some of his posts,” the archiver wrote. “This idea is a belt with UTV posts attached that allows me to quickly pull off a UTV post at any time for my reading. They are all responses to me and seem more personal and make me miss him less.” 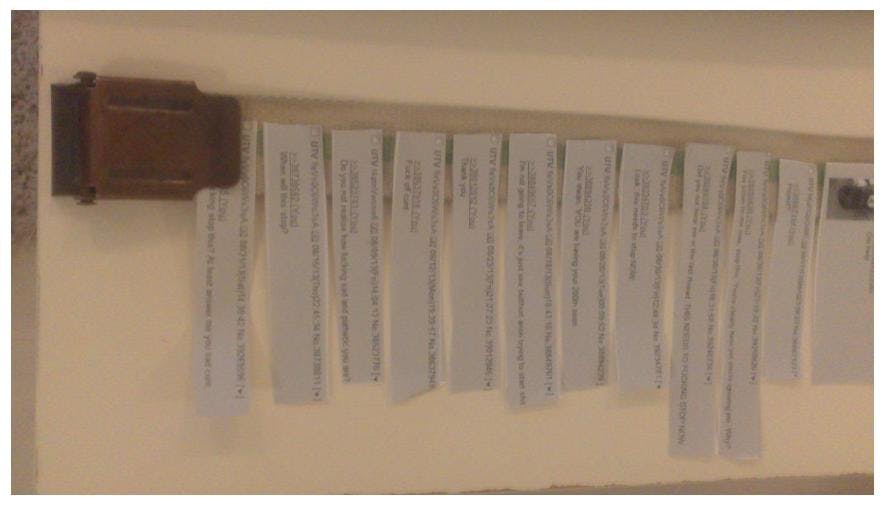 Then came “U and me TV: A tale of two detectives” and “Sun Sex and Suspicious archivers,” fictional made-for-TV stories full of dialogue and camera directions. Not to mention, an entire bank robbery scenario with more images.

On Sept. 8, the archiver began “the bait club,” declaring that he would be stepping up his efforts to obtain personal information on UTV. Four days later, he released these three YouTube videos. Their meanings are unknown.

And finally there was the £40 million ($63.9 million): The cost UTV’s family would have to pay to retrieve their son from the archiver’s bathroom floor after he had abducted him.

“This is a ransom note made up from texts in UTV posts. If I were to ever kidnap him this is what I would send,” the archiver wrote. “I would not be making sexual advances but seeing my naked body would be good for him to get to know who I am more.”

On Oct. 7, the archiver broke his silence. After months of research, he had been found out.

“I have been with UTV for 255 threads. This is the last one,” he wrote on /sp/, linking to his 97-page document. “My parents have discovered my UTV works, and they have insisted I remove everything of the type from my computer and be done with it. They will be monitoring my activities now to sure I cannot do it any more. They have given me a day to remove everything and this is my final message. I am sorry to UTV and hope he sees this and understands.”

Since coming forward with his findings, UTV has allegedly gone into hiding and had contacted the police. His only response to the archiver’s admission was a question mark.

Over the past week, the archiver’s document has been shared all around 4chan. Users are calling it one of the greatest WTF moments of all time.

“I’ve been on 4chan for nine years and this is still pretty amazing to me,” one anonymous user commented on /b/, 4chan’s random imageboard. “This site has been utter shit for the last three years and this is the best to come off it in a long time, troll or no troll.”

“Either way you look at this though, someone is seriously psychotic and beyond help,” another /b/ user added. “This just transcends all levels of autism into some new dimension of psychotic.”

While the dedication and planning it took to compile the 97 pages has captured 4chan’s collective attention, such elaborate schemes are nothing new for the community.

In April 2009, just a few months after Christopher “moot” Poole was identified in the mainstream media as the founder of 4chan, the community decided to pay their respects. And they did so at the expense of Time’s annual Time 100 poll.

Not only did the 4chan community game the online poll to have Poole take the top spot,  they rigged the rest of it to spell the phrase “Marblecake, also the game” with the first letter of each contender’s first name.

In the end, Poole was voted “Most Influential Person of 2009.”

If the recent Pronunciation Book debacle has taught the Internet anything, it’s that nothing and no one can be trusted. Fame and Web traffic are cruel sirens that can corrupt the purest ideas.

Could the archiver and UTV be one person? Or maybe the The Philmarilion is just the beginning of a sprawling viral campaign for the One Flew Over the Cuckoo’s Nest sequel? At this moment, the document is the purest it will ever be. That’s enough for most 4chan users.

“The way these things are written smell like troll. They’re too comprehensive for someone who would be this crazy,” one anonymous 4chan user wrote. “[R]egardless, this is pretty awesome.”