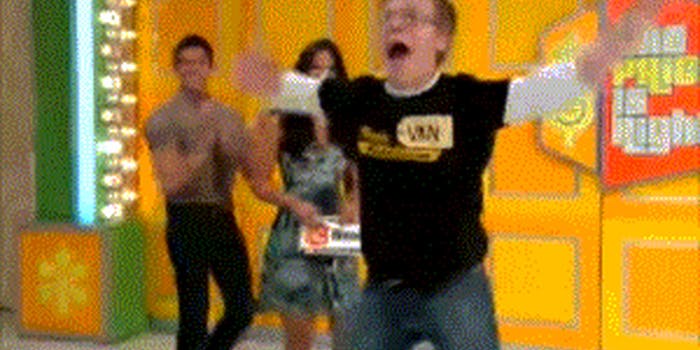 The Morning GIF: The “most GIFable man”

We'd Kermit out if we won a car too.

The price of a car is always right when it’s free, and that’s what Redditor Dylan the Despot (civilian name Van) got last Friday when he won on The Price Is Right.

Along with hugs from model Manuela Abreález and host Drew Carey, aforesaid 2013 Scion TC sedan, $2,500 cash, a laptop, printer, camera, and camcorder. Oh, and 632 comments on Reddit. “A pretty good haul, considering its all stuff I actually want!” he said in the thread.

A contestant on the 56-year-old game show’s Spring Break Spectacular, he made it all the way to the big payoff, where Carey uttered the immortal words, “Van, meet Car.” That’s where all GIFness broke loose. It was madness, and it was glorious. His roommates witnessed the performance and christened him “The Most GIFable Man.” Given this soon-to-be-classic reaction GIF, it’s hard to disagree. Once a mild-mannered college student, he suddenly transformed into a manic butterfly on E, skittering across the stage as if gravity were optional and offering to hug anything that moved; Carey abruptly friend-zoned him, having hugged him earlier, but Abreález was more accommodating and gave him a congratulatory embrace.

We welcome him to the embrace of the elite group of people who’ve been featured in the Morning GIF.