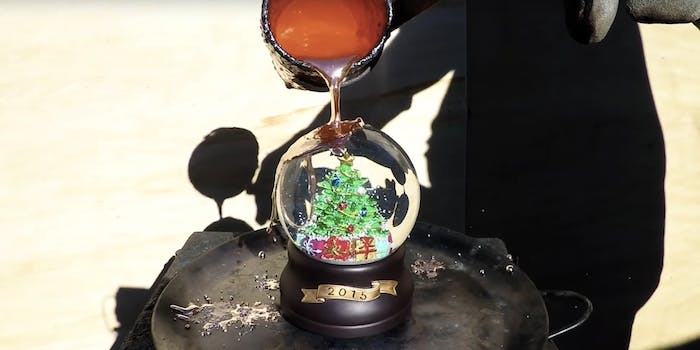 Finally, a use for the pointless snow globes people buy during the holiday season. After one mildly-impressive shake, melt them into submission with the help of molten copper.

YouTuber Tito4re‘s channel is dedicated to the intersection of blazing-hot copper and everyday items, like a Coca Cola can and Retro Air Jordans, but his 2015 snow globe melt strikes a nerve. For everyone who’s completely done with this past year, wouldn’t it be a therapeutic metaphor to douse it with scalding copper?

Thankfully Tito4re does just that. The resulting video is a satisfying destruction of a Christmas scene.

The kicker? Even after a molten copper bath, the music box inside keeps on playing. 2015 isn’t going down without a fight.