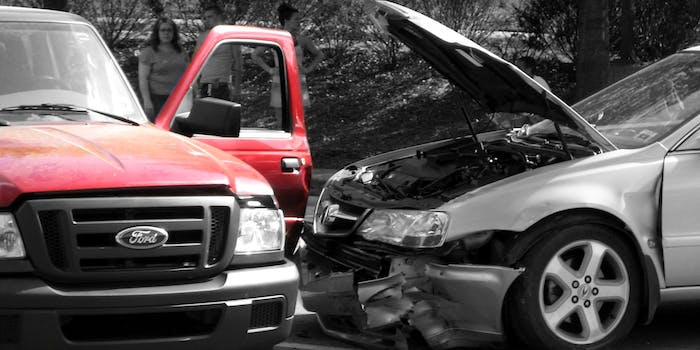 The whole rundown’s an outrageous read.

Craigslist’s Missed Connections generally doubles as a goldmine for some of the funniest and most outrageous happenstances of love, but at its most literal, it’s really just a hub for those lamenting the loss of any extended interaction that never was.

Take, for example, the case of this anonymous individual from San Francisco who wished so very much that he could have one more interaction with the man whose “big-ass, red pickup” executed a rude-as-hell hit-and-run Oct. 18 and totaled his 1992 Ford Mustang. The victim posted a long diatribe onto Craigslist’s San Francisco Missed Connections page Sunday afternoon, explaining that he questioned the legitimacy of posting the story there because “if you’d missed connecting with me, I wouldn’t have to be writing this lettering the first place.”

As the story goes, the individual who got hit was waiting at the corner of Divisadero and Lombard on his way to the marina when a “Big. Red. Stupid-looking” truck came came barreling towards his rear without slowing down at all.

It’s not going to stop, he thought. And that’s when it happened. His world slowed down. His life flashed before him. And then he rammed into the back of the SUV parked before him.

“Then the noise stopped,” the victim wrote.

“I sat frozen and unblinking for a moment staring at my now V-shaped hood. I yelled once to confirm I was alive. I yelled once more—just to be sure—this time noticing the air flowing through my windpipe. A living thing still. Adrenaline belatedly poured through my system and the only thing I could think to do was to keep yelling, as though if I stopped yelling I would stop being alive. The yells got more urgent when I began to understand what had just happened and I realized that although I was alive, I didn’t know if I was actually okay. I was afraid to try to get out of the car because I was scared at what I might discover about my body. It was somewhere in all of this that you extricated yourself but I was unaware of anything but myself and the utterly f*cked-up front of my car.”

For 13 more paragraphs the victim rolls on, explaining in full how he was brought back to reality, how the police asked too many questions, and how a hobo tried to help (“the car must have been hit”) after X-rays at a hospital came back negative.

The whole rundown’s an outrageous read, but we are left to wonder why it took four full months were the missed connection to come out. Surely, the owner of the “big-ass red truck” would have been checking the site in the days immediately following the crash. Isn’t that how Missed Connections generally works?