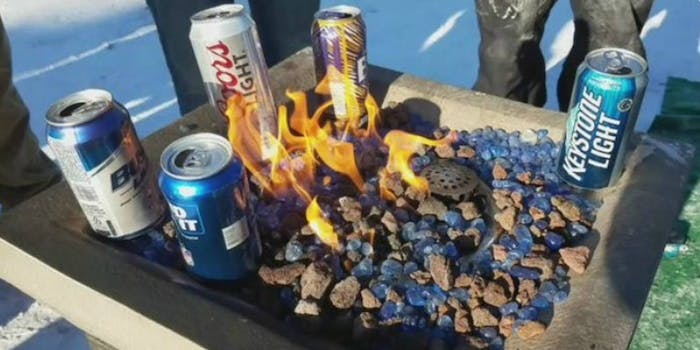 How to stop your beer from freezing at an NFL tailgate? Put it in the fire

When the temperatures are in the negatives and the wind chill is heart-stopping but there’s still NFL tailgating and beer-drinking to get done, what’s the solution? These heroic and ingenious Minnesota Vikings fans figured it out Sunday.

Take the beer and put it in the fire, so it doesn’t freeze.

It's so COLD at the @Vikings tailgate in (-20°… wind chill -34°) that they're using fire to keep the beer from freezing. #greatwhitenorth pic.twitter.com/QjIEWgBO76

Not only was the beer consumed in the minus-20 degree (minus-35 degree wind chill) weather, so were the brats and the bacon, and a few athletic-minded folks even got together for a competitive game of cornhole.

Unfortunately for the fans, the home team was not inspired by their acts of bravery. The Vikings got demolished by the Colts 34-6 on Sunday.