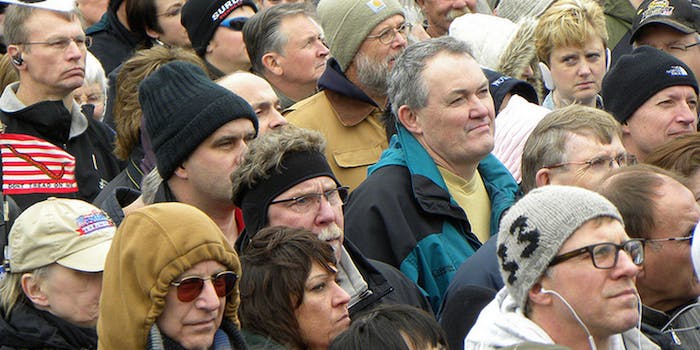 The apple fell just an inch away from the tree.

For all the talk of Dylann Roof’s white supremacist beliefs, there’s one element of his identity that’s being ignored.

Indeed, Roof’s status as a white, Southern man with an affinity for Confederate imagery, behaviors rooted in patriarchy and a vicious hatred of blacks fits the archetype of today’s white supremacist. But there’s just one more thing that wouldn’t otherwise fit the description: his age.

Roof is only 21 years old, making him a member of the so-called millennial generation, a group considered much more aware of multicultural issues and more socially progressive than their parents and grandparents. Because previous generations lived through the Civil Rights Movement, the end of racial segregation, and the elimination of laws banning interracial marriages—among other markers of progress on racial issues—a common assumption is that as the elders go off to pasture, racism will become a thing of the past.

Roof is only 21 years old, making him a member of the so-called millennial generation, a group considered much more aware of multicultural issues and more socially progressive than their parents and grandparents.

Not so fast. The Charleston shooting, along with the results of recent studies, points to an unfortunate reality. Racism is a much deeper, institutional issue than most are willing to admit, one that won’t disappear with the rise of millennials.

At the New York Times, columnist Charles Blow writes, “We must never be lulled into a false belief that racism is dying off with older people … Racism is to social progress what cockroaches are to nuclear fallout—extraordinarily resilient.”

Blow points to a study conducted by Spencer Piston, an assistant professor of political science at Syracuse University. Piston found that “younger (under-30) whites are just as likely as older ones to view whites as more intelligent and harder-working than African-Americans.”

Racism isn’t only a matter of interpersonal interactions. It’s about white people believing they are inherently better than blacks and other people of color—and acting on that belief through policy measures, hiring practices, community policing, and acts of terrorism, among many other avenues of solidifying white power and privilege.

The belief that millennials are somehow not as racist as previous generations often serves to absolve them of prejudice, excusing away the social and institutional racism that remains. It’s a dangerous notion, one that pushes the issue under the rug, allowing more subtle forms of racism to be excused away as part of a “colorblind” ethos.

But as another study shows, millennials aren’t as progressive on social issues as we would like to believe. Last year, MTV Networks and David Binder Research surveyed young people ages 14 to 24, finding that millennials espouse beliefs that presumably suggest they believe in racial equity, but their positions on key issues shows otherwise.

Seventy-two percent of respondents believe that their generation is more accepting of race than their elders, showing that millennials are buying their own hype. However, they’re also buying into dangerous myths about a so-called “post-racial” America: 73 percent of respondents said never considering race would improve society, and 68 percent said focusing on race prevents society from becoming colorblind.

However, when issues arise that are clearly fueled by racism—such as the murders in Charleston, the trend of unarmed black people being killed by police officers and vigilantes, and cultural appropriation, to name a few—the conversation amongst young people falls into familiar traps:

This is the modern magic of wishing away racism: The policies, practices, and biases of a racist system remain in place, but somehow, all the racists are gone. It’s the false understanding about racial progress that Duke University sociology professor Dr. Eduardo Bonilla-Silva warns against in his 2003 book, Racism without Racists:

“Compared to Jim Crow racism, the ideology of colorblindness seems like ‘racism lite.’ … Thus whites enunciate positions that safeguard their racial interests without sounding ‘racist.’ Shielded by colorblindness, whites can express resentment toward minorities; criticize their morality, values, and work ethic; and even claim to be the victims of ‘reverse racism.’”

This is what millennials, like their predecessors, are still guilty of doing, and studies show it.

As Scott Clement notes at the Washington Post, the National Opinion Research Center’s General Social Survey found that, along five different measures of racial prejudice, non-Hispanic white millennials aren’t much different from Generation Xers or Baby Boomers. Those measures include an evaluation of blacks being less hardworking than whites, approval of a family member’s interracial marriage, and the relative intelligence of blacks compared to whites.

The belief that millennials are somehow not as racist as previous generations often serves to absolve them of prejudice.

“White millennials (using a definition of being born after 1980) express the least prejudice on 4 out of 5 measures in the survey,” Clement writes, “but only by a matter of 1 to 3 percentage points, not a meaningful difference.”

In other words, the apple fell just an inch away from the tree.

It’s time to put an end to the myth that millennials are where the buck stops on racism. America has indeed progressed on racial issues over time, but as President Obama mentioned in his interview on Marc Maron’s WTF podcast, it’s going to take longer than we think for a country founded on the dehumanization of black and native lives to get over roughly 400 years of racist and white supremacist dogma.

Millennials may be able to help lay the foundation for a more racially equitable society, but it requires more work and accountability than many well-meaning young white people are willing to admit.

Photo via fibonacciblue/Flickr (CC BY 2.0)