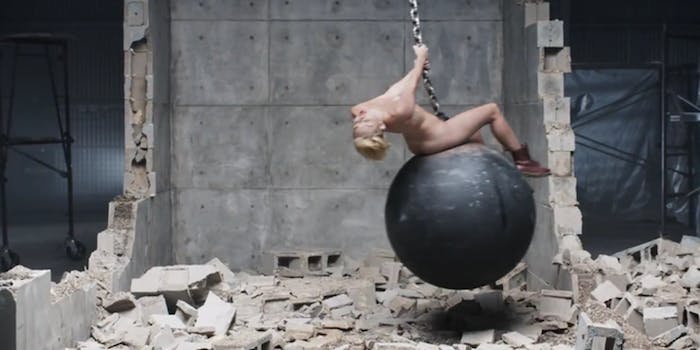 The 'wrecking ball' has been removed so its “structural integrity could be reviewed.”

Miley Cyrus has truly captured the nation’s imagination. How could she possibly follow up her twerking performance on the VMAs, and the subsequent release of the in-the-buff video for “Wrecking Ball,” which has already been face-swapped a thousand times?

By ruining a sculpture on the campus of Michigan’s Grand Valley State University.

Granted, Cyrus is not personally to blame for the removal of a pendulum sculpture outside the university’s Padnos Hall of Science. Over the weekend, a few students decided the piece of art looked enough like a wrecking ball, and decided to ride it like Cyrus does in the video. Some of them nude. (A naked Vine has since been removed.)

Some students were a bit more tasteful in their homage.

@Grand_Valley17 miley decided her future in singing was gonna hit rock bottom!! So she decided to come to #gvsu pic.twitter.com/084achGY2S

This morning, the sculpture—properly called “Untitled” by Dale Eldred—was removed from the place it’s stood since 1995 so its “structural integrity could be reviewed.”

Of course, there’s now a Twitter account for the fallen sculpture, and demands to #BringBackOurBall. No word on how the sculpture is doing after the incident.

Or what it saw.