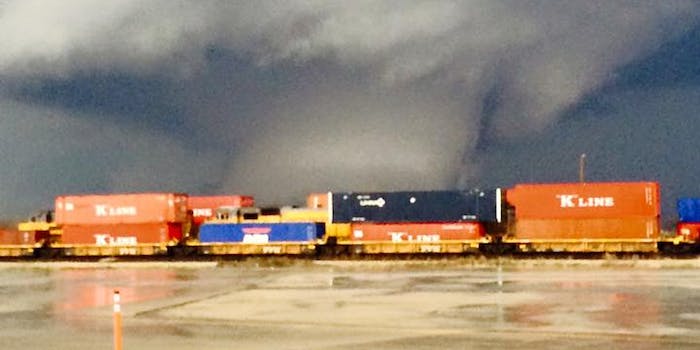 Tornadoes touch down in Illinois, Iowa, and Ohio Thursday night.

Tornadoes touched down across the Midwest Thursday—with reported twisters in Illinois, Iowa, and Ohio. At least one person has died due to tornado-related injuries.

This following a reported eight tornadoes Wednesday in Oklahoma, Kansas, and Missouri. The tornadoes are part of a severe storm that affected an estimated 95 million people on Thursday.

The glaring headline of the night’s severe weather activity took place in Rochelle, Ill., where a tornado with winds reported at 91 miles per hour destroyed local restaurant Grubsteakers, and trapped 12 people underneath the rubble in the basement. All were safely rescued Thursday evening.

WATCH: Video of a rescue from Grubsteakers earlier tonight after a tornado hit the restaurant near Rochelle. https://t.co/c2msDes5Rw

Only a few of the 12 people sustained minor injuries. @23WIFR pic.twitter.com/80qQmtaGkT

What's left of Grubsteakers Restaurant after tonight's tornado. 12 trapped in the basement, all safely rescued. pic.twitter.com/0YxVLtYukH

Crazy what mother nature can do when angered! My town Rochelle hit hard. 12 rescued from Grubsteakers.http://t.co/w2UiN2NUiN @rrstar_sports

Among the 20 destroyed homes in the rural, northwest town of Rochelle (population: 9,500) and its surrounding Ogle County was the Ogle County Sheriff Brian VanVickle’s.

Nearby Fairdale, Ill., was likewise devastated by tornadoes that left one dead and others missing.

Damage in Fairdale, IL (from tornado about an hour ago via Angel Karma / @23WIFR ) pic.twitter.com/Kr1LXjMkom

More severe weather is in the Midwest’s imminent forecasts.