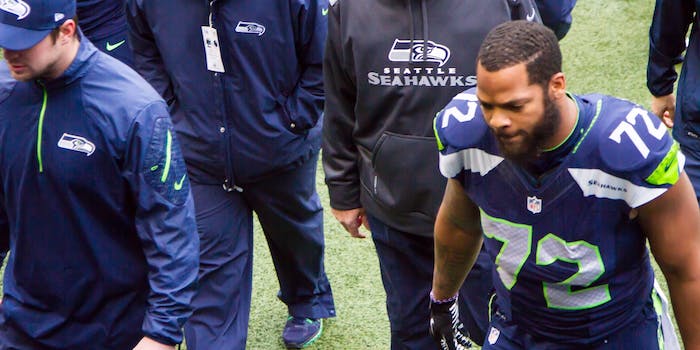 We really don't blame him after that game.

It’s a great night for the Seattle Seahawks. Although heavy favorites to win the NFC Championship game against the Green Bay Packers, they trailed and underperformed for most of the game until the final few minutes, when they somehow managed to pull off a comeback of epic proportions to win the game in overtime.

They’re heading to Glendale, Ariz., on Feb. 1 to defend their title. So can you really blame Seahawks lineman Michael Bennett for taking a bicycle on the sidelines to ride it on the field?

It’s a moment that will certainly live in NFL infamy. Is it the best victory lap in American sports? The jury’s still out on that.

• Michael Bennett on a police bike?

• Wade Boggs on a police horse?

Bennett’s already becoming something of a national football folk hero, and people are giving him a fitting soundtrack.

And that bike? Bennett borrowed it from the Seattle Police Department and they would really like it back once he’s done celebrating.

Your move, New England and Indianapolis.