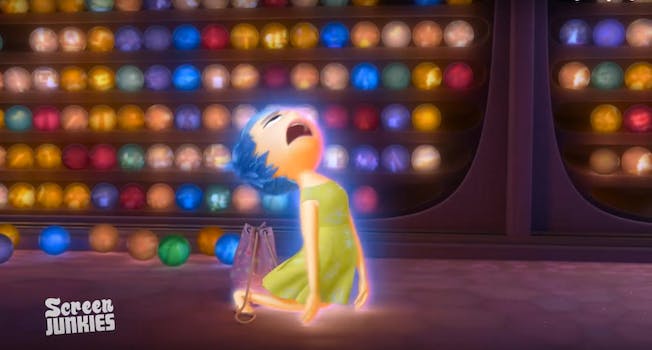 This week, the entertainment YouTube channel Screen Junkies released a video in its Honest Trailers series of the recent Pixar hit, Inside Out. The video is typical of Honest Trailers: taking a movie premise and turning it on its ear. But there’s a major problem with its usual approach this time: It trivializes mental illness.

“In a film that teaches kids they aren’t responsible for their actions; it’s just tiny people inside their heads pushing their brain buttons. You know, there’s a word for that,” the narrator says as a setup. The punchline? “Schizophrenia.”

Then, less than a minute later: “When Joy and Sadness fight over her memories, their struggle will make Riley turn on a dime between two emotional extremes. There’s a word for that too: bipolar.”

Let’s back up and go over what schizophrenia and bipolar disorder are.

Schizophrenia is more than ‘voices in your head’

The National Institute of Mental Health describes schizophrenia like this:

Schizophrenia is a serious brain illness. Many people with schizophrenia are disabled by their symptoms.

People with schizophrenia may hear voices other people don’t hear. They may think other people are trying to hurt them. Sometimes they don’t make any sense when they talk. The disorder makes it hard for them to keep a job or take care of themselves.

Schizophrenia usually presents in people between ages 16 and 30, and it’s characterized by a number of “positive” and “negative” symptoms. Positive and negative don’t refer to desirable and undesirable here, though. Positive symptoms refers instead to unusual, out-of-the-ordinary problems in behavior and thinking. This set of symptoms includes hallucinations where the patient sees, hears, smells, or feels things that are not truly there. Delusions are another symptom, including believing things that are not true. In people with schizophrenia, delusions are often dominated by a sense of paranoia.

Negative symptoms, on the other hand, are characterized by a lack of a typical emotion or behavior. Examples include showing very little emotion, having trouble feeling joy and having fun, and having difficulty completing tasks such as grocery shopping.

Schizophrenia is often debilitating to the people who have it because the symptoms can make it difficult for them to live up to responsibilities like holding down a job or paying bills. Few people with schizophrenia are ever violent. And many people with schizophrenia get along in society just fine as a result of their particular set of symptoms, how well they respond to medication and treatment, and the support, love, and understanding of their family and friends.

Most importantly, people with schizophrenia aren’t always aware of their own disease. Hallucinations and delusions feel very real, and someone with the condition may not have the cognitive ability to recognize those moments when they’re happening. This is pretty far removed from a child thinking she’s not responsible for her actions due to the personification of her emotions.

Bipolar is more than just ups and downs

Bipolar disorder is far more common that schizophrenia, but that doesn’t mean people understand it any better.

One of the major mischaracterizations of bipolar is that the mood swings occur at the drop of a hat. One minute someone’s feeling ecstatic and awesome, and the next they’re feeling low and depressed. In reality, manic episodes and depressive episodes in a person with bipolar can go on for weeks or months.

Depression is familiar to many people because it’s one of the most common mood disorders. It’s characterized by an inability to feel good, lack of motivation, and low energy. Often loved ones respond to depression by thinking the person merely needs to cheer up and change their attitude. But depression is a disease that can be debilitating to those who have it.

So when a person who is bipolar shifts from a depressive episode to a manic one, it can be difficult to spot.

Mania is characterized by having high energy, delusions of grandeur (thinking you’re the smartest person in the world, thinking you’re invincible), and being outgoing. Mania usually ramps up over time, so when someone enters a manic phase they may just seem like they’re coming out of their depression and returning to their normal, happy self. Sometimes it never gets to the point of causing serious problems in a person’s life, so mania may even harder to recognize. But mania can be quite serious, causing the person to forgo sleeping, leave jobs, and become irritable and highly impulsive.

Like schizophrenia, bipolar can be a debilitating disease to some who have it. But it can also be managed with medication and the right support network, and many people with bipolar disorder lead functional, productive lives.

What’s wrong with the Honest Trailer

The problem with the Honest Trailer for Inside Out is that it’s not honest: It grossly oversimplifies two very serious mental illnesses by writing them off as the perfectly normal mood swings of a child who just had to uproot her entire life and move to a new city. It may seem like making too big a deal over “just a joke.” And it would be, if this joke happened in a vacuum, but it doesn’t.

Mental illness, particularly mood disorders like bipolar, are particularly misunderstood in American culture. As evidenced by countless comics, essays, and videos on the subject, people who suffer from mood disorders are often told to simply change their attitude. But you wouldn’t tell someone with cancer to simply will their tumor away. Yet we see mental illness as something that can be willed away.

It doesn’t help when we describe the behaviors of people without the disease as characteristic of the disease. Think about your neat-freak roommate who apologizes for her tyrannical need for the countertop to stay spotless as “being OCD.” Or that time your friend said he was “depressed” about his team losing the playoffs.

According to the World Health Organization, our misunderstanding and the stigma of mental illness may be keeping some people from seeking treatment for their disease out of the fear that the diagnosis will negatively affect their relationships. Some people just fear the diagnosis itself.

But if we treated mental illness like what it is—a disease in need of medical treatment—then perhaps we’d all be a little healthier.