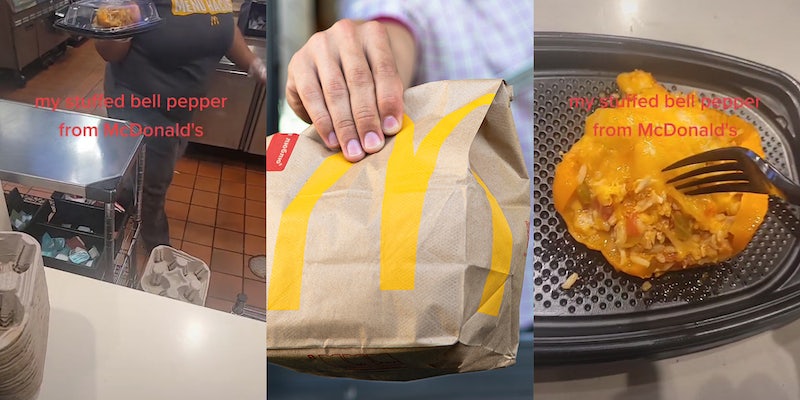 ‘I’m at McDonald’s, and watch what I order’: McDonald’s customer says they ordered stuffed bell pepper

A McDonald’s customer claims she ordered a fresh stuffed bell pepper from a location in Louisville, Kentucky.

TikTok user Ashauntee’s (@mi55lady) first video about the item that doesn’t exist on the menu received 1.6 million views, and the second has over 208,000 views. Both were posted on Sept. 25.

Any McDonald’s aficionado can tell you that some of the best McDonald’s offerings are its limited release items. Take the spicy chicken nuggets, for example. USA Today reports the nuggets originally appeared in September of 2000 in select locations for a short amount of time, but they were such a hit that the fast-food chain brought them back multiple times since.

Ashauntee starts filming her two-part video from the McDonald’s drive-thru, telling her 15,000 followers: “I’m at McDonald’s, and watch what I order.” Once it’s Ashauntee’s turn at the speaker box, and she’s asked what her order is, she dives right in.

“All right, can I get a stuffed bell pepper fresh, please?” Ashauntee confidently asks. There’s a long silence, during which you may imagine the McDonald’s worker’s confusion as McDonald’s is not known to have bell peppers on its menu.

To everyone’s surprise, the woman behind the drive-thru speaker box mic tells Ashauntee to “pull on forward.” But then Ashauntee tells the speaker that she’s about to come in, which is an unusual request for a drive-thru order. The next shot is Ashauntee’s point of view as she walks in through the front doors and tells the attendant that she was just in the drive-thru and is the customer who ordered the “stuffed bell pepper fresh.” She repeats this twice, and the video ends.

In the second video, Ashauntee asks the attendants for her bell pepper. She also keeps clarifying whether it is fresh. Finally, someone walks up with a takeaway box with one stuffed bell pepper. According to one of Ashauntee’s comments under the video, the pepper was stuffed with chicken, rice, pepper, and cheese. “I think they’re probably better than Chick-fil-A,” Ashauntee says.

Now for everyone who is extremely confused, the claim that anyone can order a bell pepper from McDonald’s is inaccurate. McDonalds’s doesn’t serve stuffed bell peppers, fresh or otherwise, at its Louisville location (or at any other location). But not everyone in the comments section understood the joke.

“Is this only certain locations? I need tips!” one commenter wanted to know. “Wait I can get that at McDonald’s?!” another asked. McDonald’s employees were also confused. One said, “I work for McDonald’s how the hell you get this ?!” to which Ashauntee replied with laughing emoji. One person even chastised other commenters for their surprise at the stuffed bell pepper and lack of McDonald’s menu knowledge, saying, “yall do know every location has different food right? Like one McDonald’s can have the wraps and the one 3 towns over won’t.”

The TikToker did settle the confusion when one user asked whether this was the case in all McDonald’s locations. “No,” Ashauntee clarified. “I’m friends with someone that cooks every thing but McDonald’s at McDonald’s.”

But most people were in on the joke and just added their own bits to the gag. “Gotta specify FRESH because McDonald’s just has stuffed bell peppers sit-in in a warmer all day,” one user joked. “The amount of people that believe McDonald’s really have bell peppers,” another user said, and Ashauntee responded, “mind blowing.” A third asked, “I wonder how many people have tried to order them,” with multiple laughing emoji.

The Daily Dot reached out to Ashauntee via TikTok comment.