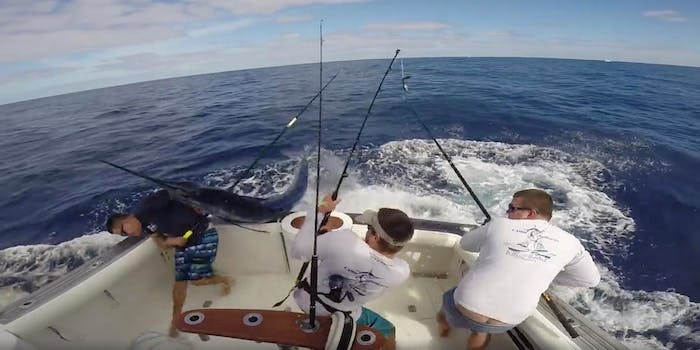 The hunter briefly became the hunted.

Fishermen are fond of tellings stories about the one that got away. But you know what makes a better story?  The one that almost carried you away.

When Conor Cogan went on a fishing trip with some of his buddies in Port Stephens, Australia, he was hoping to come back with a nice-sized trophy. As it turns out, he was lucky to come back at all.

The video below shows Conor and his friends trying to land a 200-pound marlin. The fish, evidently, had other plans.

“We had only just hooked up so he was still green and pretty angry,’’ Cogan wrote on Facebook. “He only jumped once and then made this turn, caught the wash and speared straight towards me.’’

Cogan was able to duck out of the way, and the marlin quickly dove back into the water, meaning that man and fish will both live to fight another day.