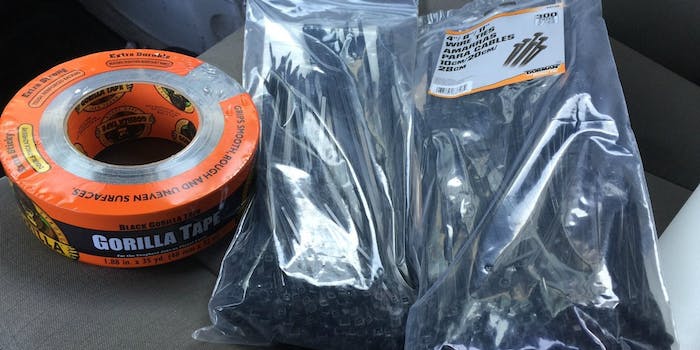 Don't get on this guy's bad side.

A note of advice to all former, current, and future best men: If your bro breaks up with his bride before the wedding occurs, you should not now—or in the future—date that ex-fiancée. And if you can’t help it and do start dating your best bud’s former lady, better not to leave any of your possessions around your (probably) former friend.

This guy could have just smashed his former best man’s Wii, but instead he makes use of a whole bunch of tape, zip ties, and (strangely) some glitter. Watch the jilted dude’s delicious revenge take shape.

I thought the revenge was, despite the financial cost and time spent on the project, brilliantly done. But many Imgur commenters are siding with the ex-fiancée, who they believe may have saved herself plenty of trouble by not marrying the diabolical would-be groom.

And the revenge-seeker, a Reddit poster named PM_me_your_Jeep, made it clear that, as far as he knew, his former fiancée wasn’t cheating on him; she began dating his best man shortly after they broke up. Otherwise, he seems to be over the split.

Wrote PM_me_your_Jeep, “I don’t care what she does and hope she has a great life. I would’ve preferred the guy that introduced us 4 years ago, took our proposal photos, and agreed to be my best man wasn’t the one that she went to first. But since that’s what happened, I find no reason to be friends with him anymore so I sent him back his property and had fun with it.”