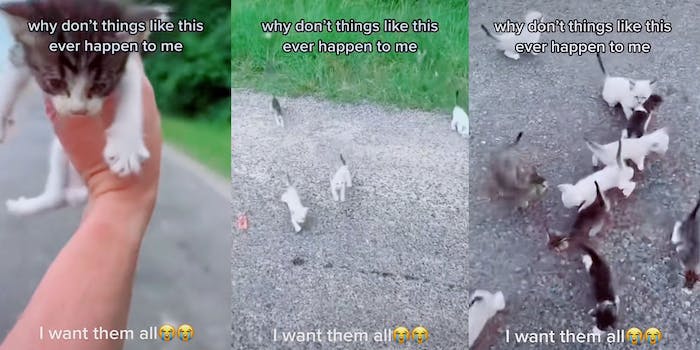 What was meant to be a rescue of one kitten turned into 13.

Less is more tends to be the usual adage for a lot of things, but it’s hard to argue for that when being overtaken by kittens.

In a video shared on Facebook, Robert Brantley showed what happened when started filming a tiny kitten on the side of the road.

“Left work to go to the range,” Brantley explained. “Passed a baby kitten I knew wouldn’t make it through the night and the wife has been wanting a cat for the farm; figured I’d stop and rescue the thing.”

The kitten was friendly and approached Brantley right away. But that was around when he noticed multiple heads popping out of the grass; in another context, it could’ve been the start of a horror movie attack. But in this case, Brantley was just overwhelmed by a good dozen kittens—many of which tried to approach him and rub against his feet and ankles.

“Oh my gosh, I can’t take you all,” he says when the kittens run toward him.

A version reposted by Lauren René Allen on TikTok, where she added the caption, “why don’t things like this ever happen to me” took the video to another level. To date, Allen’s version has been viewed more than 20 million times.

Another version posted to Twitter, in which @najihahshahrel joked that Brantley “just got scammed by kitten,” has been viewed nearly 1 million times.

Brantley is laughing as he discusses the kitten problem that appeared in front of him, but for the people who watched and didn’t have a dozen kittens barrel toward them, they simply cannot relate.

“‘We have a kitten problem’ SIR I WOULD LIKE TO TRADE PROBLEMS,” one person wrote in response to Allen’s TikTok video.

“This doesn’t happen to me because I’d take them all home and I’d never turn them away,” another added.

As it turns out, so did Brantley. He posted an update in which all 13 kittens are roaming around his car, where he placed them so he could transport them home. “The tactical Honda was not prepared for his,” he joked. The plan, according to Brantley, is to fatten the cats up and to help them all get good homes; he’s also crowdsourced advice so he can help take care of the kittens.

Since Allen’s repost of the kittens went viral on TikTok (and Allen directed people toward the Brantleys), Brantley’s wife Courtney made an account where she’s sharing updates with the kittens, such as several of the cats laying in a cart next to the Brantley’s dog and one of the kittens being given a bath after a messy breakfast. And the plan is to share the journey with the internet.

@courtneybrantley1 Kitten update! Thank you all so much for all the kind words, advice and love that has been shown! Come be part of this exciting experience with us! Like and follow for part 2. #fyp #kittens #robertbrantley #kittenhero ♬ original sound – courtneybrantley1

@courtneybrantley1 Part 2: Kitten bath! Is there anything more attractive than a man who rescues a litter of kittens and then gives them a warm baby bath…..🥰 stay tuned, we have some exciting news that we would love for you all to be part of and help with! #fyp #robertbrantley #kittensoftiktok #oneofthegoodones #cutenessoverloaded ♬ original sound – courtneybrantley1

“We have been completely amazed and humbled by all of the likes and shares, the follows, and the extremely kind words that have been said to Robert for him being recognized just for being the guy that he is. So we want to invite you all on this extremely exciting journey that we’re taking with these kittens.”