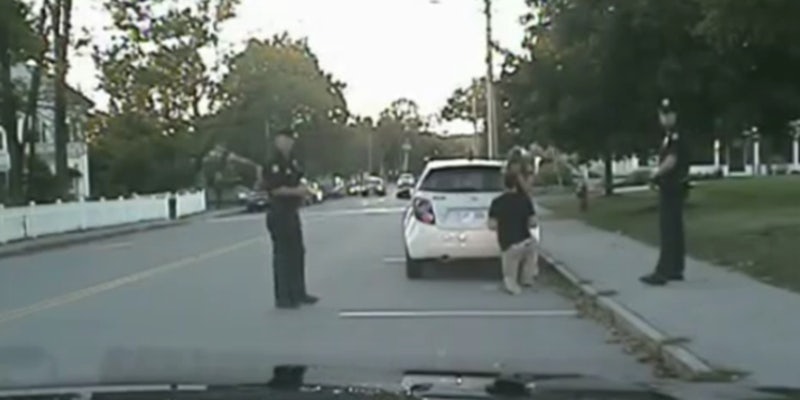 After she stopped sobbing, she said yes.

Meme marriage proposals have become quite popular recently, despite being sort of insufferable. But Matt Van Vliet might have topped them all by terrifying his bride-to-be with a fake police stop.

The video evidence shows Van Vliet and girlfriend Samantha Labo being pulled over last fall by New London, N.H., police, who are recording the traffic stop on their dashcam. This is already very romantic, but then two cops get out and begin to question the pair. Turns out there’s a warrant for Van Vliet’s arrest, and he has to step out of the car. He’s then handcuffed, while his girlfriend stands nearby crying. As the cop frisks him, he finds something in his pocket. It’s an engagement ring!

M. Night Shyamalan twist alert: Turns out Van Vliet was in cahoots with the police all along! After she stopped sobbing, Labo said yes.

According to CNN, the couple met “when they were arrested at an underage drinking party in their freshman year at Colby-Sawyer College.”

The hopeless romantic in me believes these two crazy kids were meant for each other, but the hopeless cynic thinks they all might have been in cahoots to make a viral proposal video. What is true love if not a meme to remember? Can’t wait to see what they do for a wedding video.