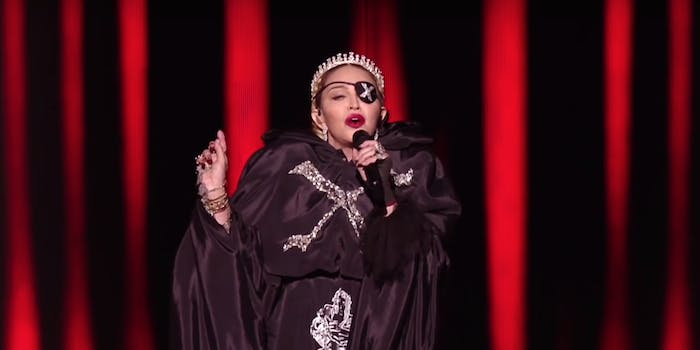 Eurovision, the world’s largest and arguably coolest singing competition, has just ended. It saw a mirage of various performances: the interesting spectacle Ireland put on, the competition-winning ballad sung by the Netherlands, and of course, the political and largely off-key performance given by Madonna.

But many online viewers didn’t understand the upset millions of people had when they saw her perform live. It appears the pop legend has auto-tuned and key-corrected her original performance before uploading it to digital platforms such as YouTube. Too bad nearly 200 million people saw her sing it live.

Madonna’s team really edited her live vocals from her Eurovision performance on her youtube account as if we’d forget that mess pic.twitter.com/E5dedDitvn

Here’s a side-by-side comparison of the live performance and the one eventually uploaded to Madonna’s YouTube channel:

During the live show, Madonna stepped on stage with an eyepatch and gave a performance many said was out of pitch, with various dancers, such as those in large brown clocks, moving around her in what many deemed to be awkwardly out of place for the European singing competition highlighting talented unknowns—and not just because Madonna is American.

Thank God they used constant auto-tune for the rest of #madonna's performance because there was no way I could listen to her awful live voice any more!!! #eurovision

She later turned heads while bringing out Quavo from Migos in a political performance with dancers wearing gas masks, singing her new song “Future,” in what has been since been deemed an off-key and auto-tuned performance.

The singer has since allegedly corrected her vocals on YouTube, but that still does not change the initial impact felt by those who heard what originally aired live on television.

#MadonnaEurovision all the right notes, but not necessarily in the right order. pic.twitter.com/0mpDcEWoRC

Some people’s dogs were even in shock.

Maybe her live, worldwide tour will make up for it?