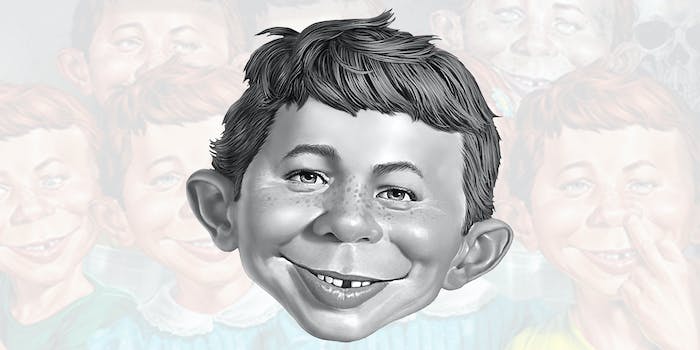 Mad Magazine is going away, and everyone is in mourning

After 67 years of satirical, juvenile, and hilarious content, Mad Magazine is disappearing from news stands. Although DC Entertainment, Mad‘s parent company, has yet to make an official statement, according to CNN  “a person familiar with the matter” said the upcoming August issue will be the final Mad Magazine.

Mad first appeared in comic book form back in the fall of 1952 and cost a mere ten cents. It was published by Entertainment Comics, who were known for shocking horror and crime comics, including titles like Tales from the Crypt.

Mad was created by a writer and artist named Harvey Kurtzman who also wrote the vast majority of the first issue.

As a comic book, Mad spoofed things like other comics and popular television and radio programs.

In 1955, Mad switched over to its better-known magazine format. Many people believed this was to escape the oppressive restrictions of the recently adopted Comic Code Authority, but famed EC comic publisher William Gaines remembered it differently. In a 1983 interview with The Comic Journal, Gaines said he agreed to the switch to keep Kurtzman on board:

Harvey had come to me and said, “How would you like to turn Mad into a slick magazine?” And I said I wouldn’t like to turn Mad into a slick magazine, I’m a comic publisher, I don’t know anything about slick magazines, it’s a whole different ballgame and I’m not interested… And that was the end of it for six, eight, 10 months, until he was offered this job with Pageant… as I recall, he was going to begin with a section of the book to do all by himself and also a good chunk of money, which was more than he was making with me. And I countered this by recalling that he had wanted to make Mad a slick. And I said, “Harvey, if you stay, I’ll let you make Mad a slick.”

Kurtzman left a year later despite the switch, but whatever the reason, Mad’s conversion from comic book to magazine forever changed the company, allowing it to take on a wider range of topics—like sex and politics.

Over the next several decades, under the leadership of Gaines and new editor Al Feldstein, Mad Magazine become a major force in the industry, eventually selling millions of copies a year. It introduced the world to artists like Sergio Aragonés, Al Jaffee and Don Martin, and it made Alfred E. Newman’s face famous across the world.

That face, by the way, was not created by Mad. Although Feldstein coined the name, the face had been part of American popular culture since at least the 1930s, and its creator is officially unknown.

Mad Magazine has been a staple of popular culture for over 50 years. It was a direct influence on many artists and comedians. It was referenced on several episodes of The Simpsons, including the time that Bart dropped by the Mad offices during a trip to New York City.

Many things lead to the gradual decline of Mad Magazine: The rise of digital media, the death of William Gaines, and the loss of many of its most iconic artists.  In 2018, the head office was relocated from New York to California, and after publishing its 550th issue, Mad was rebooted at issue #1 under new leadership.

Old issues of the magazine, reissued with new covers, will continue to be available at comic book shops, and the company may continue to publish some of its special books, such as its annual end-of-the-year special, but Mad as we know it is gone.

The public, and comedians specifically, mourned the magazine’s passing, and many celebrities weighed in by proudly posting their cover issues.

I am profoundly sad to hear that after 67 years, MAD Magazine is ceasing publication. I can’t begin to describe the impact it had on me as a young kid – it’s pretty much the reason I turned out weird. Goodbye to one of the all-time greatest American institutions. #ThanksMAD pic.twitter.com/01Ya4htdSR

So sad that MAD magazine is shutting down. It was the gateway to subversive humor as a kid, copies bounced around the house between my sisters and me, was always packed to go on summer vacations. I tipped my hat to MAD by having Hogarth show it to the Giant in IRON GIANT.
Salute! pic.twitter.com/x95DoX82DC

This was the first @MADmagazine I ever purchased. I was 7. The Fonz (@hwinkler4real) was the coolest guy in the world so this cover was revelatory in its subversiveness. And inside, the satire of All the President’s Men opened my mind to a world of satire I didn’t know of. pic.twitter.com/onFYESJQTl

Anything that makes @alyankovic sad should be illegal. And specifically: canceling @MADmagazine is dumb. https://t.co/TJMJ7Dgukh

RIP Mad Magazine. Truly a sad day. We need it now more than ever! pic.twitter.com/uh8i1Dttz2

MAD Magazine is closing. Like millions of others, MAD Magazine showed me what humor is for and thus gave me my life’s direction. I used my allowance of $1.50 to buy each issue, which in 1987 cost $1.35 [(cheap!) it said next to the price].

When I was a kid, my dad had a large box of Mad magazines from when he was a kid. My brother and I read them constantly. Wish we still had them. #RIP Mad magazine.

I am also really bummed about the shuttering of #MADMagazine . It was a huge influence on my humor, and a constant, reliable companion for a lonely, traveling boy.

(And to a lesser extent, Alfred E. Neuman. You always creeped me out.)

Part of my childhood just died.https://t.co/RS8mlZwTEJ

Hard to imagine a world without @MADmagazine– My older brother's collection helped me learn to read. It taught a generation how to question & mock the status-quo. An honor & a career highlight to be ridiculed mercilessly by that "usual gang of idiots" ❤️You Madly, Lube Skystalker pic.twitter.com/GvKpQszL7A

To anyone saying MAD Magazine *used* to be relevant….remember this, from just last fall?https://t.co/OUgTFY6zMc

Satirical papers like The Onion (which stopped its own print publication in 2013) continue to thrive and, thanks to the rise of superhero movies, comic books are enjoying a new golden age, but there’s nothing quite like Mad Magazine. It was many kids’ first peek into the world of satire. It was smart but never pretentious, childish yet clever, and, most importantly, it was devilishly, devastatingly, funny. Mad‘s impact on the current crop of comedians, writers, and cartoonists can’t be overestimated or replaced. It’s up to this new gang of idiots to pick up the banner that Mad has finally set down.