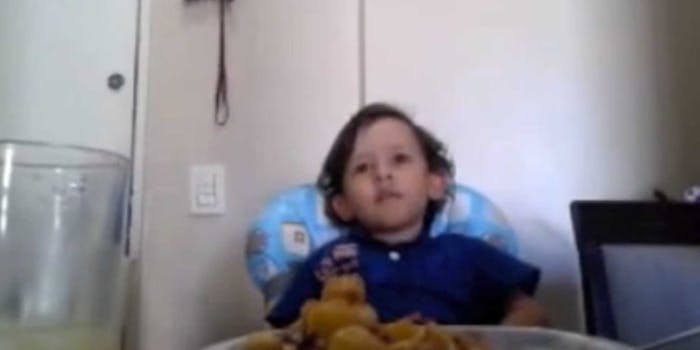 When it comes to eating his octopus, Luiz Antonio is having none of it.

When it comes to eating animals, Luiz Antonio is having none of it.

The youngster came to the decision that many take years to make, and it all came to a head during Flavia Cavalcanti’s plea to get him to eat his octopus gnocchi.

Cavalcanti originally uploaded the video to YouTube two weeks ago, but Raffaella Ciavatta translated the video from Portuguese so that it reached an English-speaking audience.

Luiz Antonio was initially more worried about the heads belonging to the octopus legs than the food on his plate. Cavalcanti explained that they were at the fish market and the heads were chopped off.

Then Luiz Antonio asked one of the go-to questions in any young child’s arsenal: “Why?”

She tried explaining that it was a normal thing for them to eat different animals, but he didn’t quite see her logic.

They’re animals, he explained, so why do we kill them to eat? He wanted to take care of them instead.

Even if it was a ploy to get out of eating the octopus, Luiz’s observation clearly touched Cavalcanti.

“I’m doing something beautiful,” Luiz Antonio said before going back to eating his potatoes and rice.

That’s a message vegetarians can get behind.