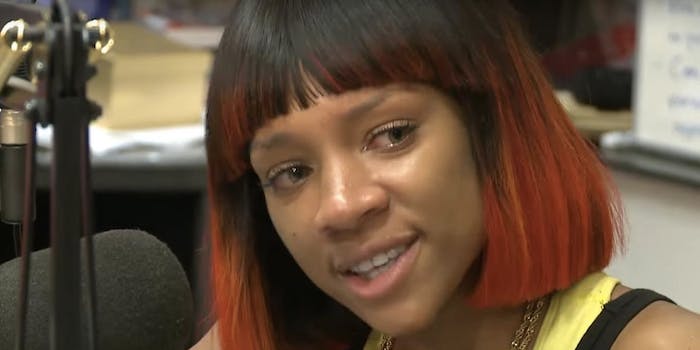 But she's also in on the joke.

Lil Mama, the creative genius who gave us the 2008 masterpiece “Lipgloss” and a former host of MTV phenomenon America’s Best Dance Crew, is now officially a meme.

Back in 2011, the hip-hop artist appeared on Power 105.1’s The Breakfast Show, a morning radio program whose hosts grilled about her career. She eventually broke into tears in talking about releasing her album when she was 17, as her mom was dying of cancer—definitely a hard moment to swallow.

But fast forward to today, and Lil Mama’s tears have turned into a hilarious punchline. On the Internet, nothing is ever too old or too sensitive to remix for viral magic. Just take a look at the similar crying Selena Gomez meme or Demi Lovato’s “twin sister” Poot, allegedly locked in a basement for years (not really, it’s just a bad photo of Lovato).

But lest you feel bad about Lil Mama’s misfortune, note that she posted one of these memes to her own Instagram account. It’s not as brutal as some of the jokes from the Twitter, but at least she’s aware that she’s getting meme-ified and playing along.

This isn’t the 26-year-old’s introduction to the Wild Wild Web and its humor. Exhibit A:

Lil Mama was also totally in on the #sausagemovement rap craze that swept the youth earlier this year, releasing a saucy single titled “Sausage.” Eggs, bacon, grits, sausage, and Mama in the kitchen.

So we can hope that Lil Mama is taking the new meme with some good humor. Because really, that face is perfect for some of life’s darnedest moments. The Mama meme might not be cool, but it sure is poppin’ on the Internet.

Check out the rest of the Lil Mama Crying memes for yourself, but be forewarned: you’ll be in tears just like her from laughing so hard.