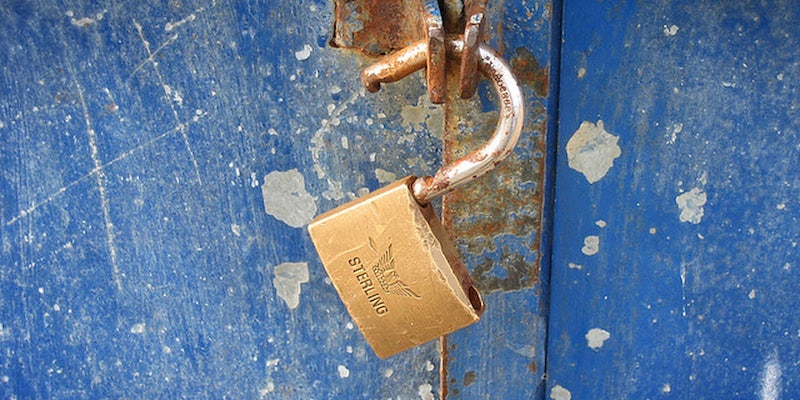 It's time to break set our mobile phones free.

Your computer has died and you’re ready to upgrade. So you stroll into your friendly neighborhood Best Buy and get a great deal on a top of the line laptop. Let’s call it the DellovoMagicbook Pro.

There’s one hitch: You have to sign a two-year contract with your local Internet provider to get online. And according to this agreement, it’s actually illegal—not to mention a breach of contract—for you to “unlock” the computer and use it on other networks or install unapproved software.

Would you purchase a computer under these conditions? Seems unfair, doesn’t it? Well, as most of you probably know all too well, these conditions apply whenever you buy any kind of mobile device.

The only thing that distinguishes a cellphone from other computers is the network it connects to and the carrier that controls it. That’s it. But more than a decade of corporate-friendly policies have given companies like AT&T and Verizon control over our mobile devices. 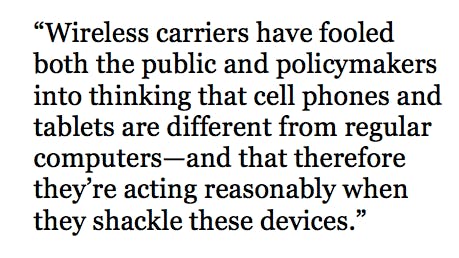 The wireless carriers, along with manufacturers like Apple, HTC and Samsung, have fooled both the public and policymakers into thinking that cell phones and tablets are different from regular computers—and that therefore they’re acting reasonably when they shackle these devices.

Case in point: Earlier this year , a ruling from the Librarian of Congress reversed a longstanding interpretation of the Digital Millennium Copyright Act (DMCA) and made cell phone unlocking illegal, potentially punishable by enormous fines and years in jail.

Users were incensed. More than 100,000 people told the White House that unlocking should be legal again. The White House sided with users, and told Congress and the Federal Communications Commission to figure out a fix.

Now all kinds of bills are on the table. In the last week, members of Congress from both sides of the aisle have been scrambling to get this done. Sen. Ron Wyden introduced the “Wireless Device Independence Act,” Sens. Amy Klobuchar, Mike Lee and Richard Blumenthal introduced the “Wireless Consumer Choice Act” and Sen. Patrick Leahy and others introduced the “Unlocking Consumer Choice and Wireless Competition Act.” More members of Congress—Reps. Jason Chaffetz and Anna Eshoo among them—are planning to introduce their own bills in the coming days.

All of these bills take differing approaches, and each has its strengths and weaknesses. Yet they all point to a simple, yet revolutionary idea: Consumers should be free to choose how and where they use their mobile devices.

People speaking out against the DMCA ban are largely focused on legalizing unlocking. But if we’re serious about wireless freedom, we need to take it a step further: Carriers shouldn’t be allowed to shackle our devices in the first place.

The Librarian of Congress’ move to criminalize unlocking, and the White House’s pushback, have brought the issue of wireless freedom back to the forefront. The sausage-making process that Congress is about to undertake will be messy, and the powerful forces that want to maintain the status quo will do their best to water down or outright kill any legislative fix to this problem. That’s why it’s essential to ensure that any bill Congress adopts does the following:

1) Free our phones. We shouldn’t have to ask for permission to use our devices how we want, where we want and when we want. Our laws and rules must protect our freedom to connect under all circumstances.

3) Protect privacy. Without access to the software on our phones, we can’t ever fully control our devices or protect ourselves from snooping and spying.

4) Protect innovation and competition. Restrictive practices and policies—including copyright law and carriers’ terms of service—hold us back from creating the next generation of world-changing devices, software: they hinder wireless competition.

AT&T and Verizon are sure to put up a fuss. They’ll argue that they already unlock phones upon request. But that’s not the point. Consumers shouldn’t have to beg for the right to unlock their own phones, for any use, at any time.

Besides, the carriers already use early termination fees to keep customers under contract, and these companies recover (often multiple times over) the initial device subsidy. Carriers have no reason—other than greed—to further restrict what consumers do with their devices.

There’s another reason why Congress needs to step up to the plate: Open mobile devices and networks are key to future innovation. We’ve seen this before: In the 1960s policymakers  finally put a stop to this kind of corporate nonsense  in the landline market by allowing customers to attach their own devices to the network. The FCC’s “Carterfone” decision in 1968 ended AT&T’s practice of squelching attempts to innovate on its network or the devices that connected to it. The decision forced AT&T to allow unapproved devices to connect to its network—in this case, a device that helped increase the reach of rural telephone networks. More importantly, the move unleashed a wave of innovation  in the U.S. and around the world.  Telephone handset prices plummeted, answering machines and cordless phones became commonplace and computer modems were invented, ushering in today’s Internet era.

Cell phones have changed our lives. The vast majority of us can’t live without them. It’s time to treat these device as my laptop’s equal in the eyes of the law.

Josh Levy leads Free Press’ work to secure an open Internet, strong protections for mobile phone users, public use of the public airwaves and universal access to high-speed Internet. Before joining Free Press, Josh was the managing editor of Change.org, where he supervised the launch of more than a dozen issue-based blogs.