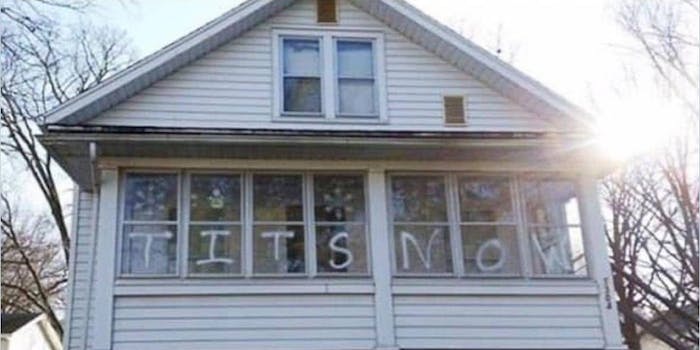 An old but good meme.

Last Saturday, Twitter user @Heisenherr posted a picture of what they claimed was their house, with the words “tits now” spelled out on the front windows. According to @Heisenherr, the children wanted to write “let it snow” on the windows, and a second picture showing the letters l and e on a pair of side windows completed the picture of an innocent yet funny mistake.

However, this is not @Heisenherr’s photograph. In fact, it’s not even new. The “Le Tits Now” meme is an old one by internet standards, going all the way back to 2010 when someone on 9Gag rearranged some Christmas-themed letter blocks and posted the results online.

Since then, the joke has spread slowly across the internet, breaking out into meatspace in 2015 when SNL used it in one of their Jeopardy sketches—featuring Sean Connery reading obscene mispronunciations of all the categories.

The photographs from the tweet date to a Reddit post, also from 2015, but just because it’s an old joke doesn’t mean it’s not still a relevant one and a good bit of juvenile humour may be exactly what we need to get through the final weeks of 2020.

And while OP is getting (lovingly) ripped for, perhaps jokingly, claiming it was their own house, most people are just taking it for the gift it is.