Warning: You might get whiplash trying to dodge all the references.

Lena Dunham’s Dick is not a new punk band. It’s the title of the nearly empty website of writer Harris Danow. It’s also, coincidentally, the title of a recent Craigslist “missed connection” post about a guy’s college girlfriend, who happens to be Lena Dunham, of the show Girls. And it opens with this line:

I was waiting for the L train when I saw you again. At first I couldn’t tell it was you. Someone had Sharpied a penis on your face.

It’s written from the point of view of Dunham’s ex, seeing her again after the success of her HBO show Girls. It’s a very lengthy missed connection, written more like fanfiction. 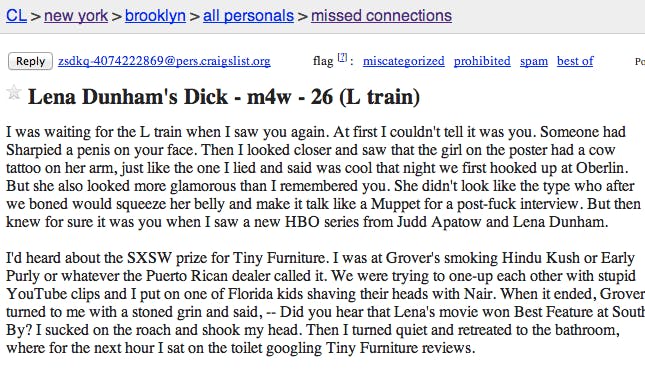 Creative writing disguised as a Craigslist ad can be effective, or it can go very wrong. Oberlin, Dunham’s alma mater, is name-dropped; so are Zach Braff and Gawker. And a lot of specific scenes from Girls.

— I read on Gawker that he’s based on her college ex, Bud said. — Apparently he came out after they graduated.

I was confused. At first I thought this ex was someone else. Someone you dated before me, maybe. But no. There were no other college boyfriends. Just me.

— Well the casting ruined it, Bud said. — I mean the guy’s flaming. How could she not know that someone that gay was gay? I would’ve bought it if they went Zachary Quinto gay. But they went Perez Hilton sings Elton John on Broadway gay. The elevator reached the lobby and the agents strode out, while I stood there alone like an idiot.

I know I confided in you that I read all the Baby-sitters Club books. And that, yes, I like the occasional finger up the butt. But you know I’m not gay. I guess this was just you fucking with me.

Despite my confidence being at an all time low, the day wasn’t all bad. BabyUnicorn85 finally wrote me back and we were meeting at Last Exit in Brooklyn Heights. I got there early and sat at the bar with a Maker’s Mark, jotting down play ideas in my Moleskine. I didn’t really have any ideas, but wanted her to think I was a cool, writerly type.

My jokes landed. My stories charmed. My eyes made contact. I even listened in a way that made her feel heard. It was amazing. For a few short hours, I was the guy I always wanted to be. I wish you could’ve seen it.

If you asked me what we talked about, though, I couldn’t tell you. That’s how in the zone I was. But then she touched my knee and said–

— Do you watch Girls?

Warning: In this passage, you might get whiplash trying to dodge all the references.

After work I took the J home and stumbled up the stairwell of my building, using my sleeve to block the cat pee smell. The roommates were watching SportsCenter, so I hid in my room, which barely fit my IKEA futon and Craigslist dresser. I opened my MacBook to work on my play. But the only words I could think of were, a new HBO series from Judd Apatow and Lena Dunham.

Could this be some guerilla promo for season 3 of Girls? A recent “teaser” for next season was narrated via Instagram photos. Makes sense that they might also co-opt a very appropriate millennial medium: the missed connection.

Update: Looks like redditors and Brooklyn Mag came through with the deets: The author is Harris Danow, and he’s a writer’s assistant on the only show you love to hate more than Girls. That’s right: Danow works for The Newsroom. His latest tweet asks, “Blair Underwood is a dude?” We look forward to the fanfic to follow.