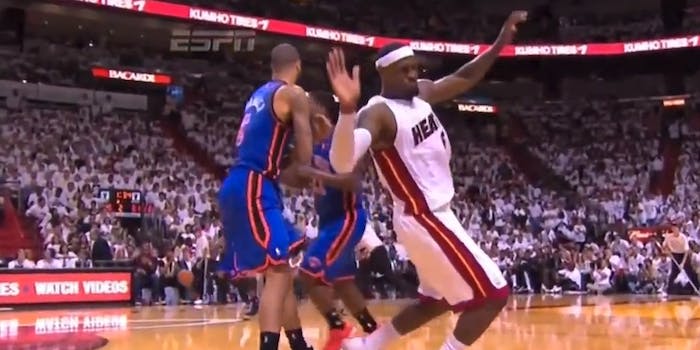 #LeBroning teaches you how to flop like a 4-time MVP

LeBron James is definitely the best basketball player on the planet, but he's also a flopper.

LeBron James is definitely the best basketball player on the planet, but he’s also a flopper.

Despite being 6’8″, 250 lbs., the four-time MVP possesses a penchant for collapsing unceremoniously onto the court upon even the slightest touch from an opposing player, an obvious ploy to draw a foul from the officials.

It’s something that’s gone on for years. In fact, James even had to publicly defend his antics last May. “Some guys have been doing it for years, just trying to get an advantage,” he said. “Any way you can get an advantage over an opponent to help your team win, so be it.”

So be it. Suit yourself, Bron. Just as with Tebowing, Linning, and Bradying, the Internet’s still gonna go wild over your antics.

Recently, a series of vines have begun to spring about that find teenagers taking intentional diggers after making quick contact with another individual’s elbow.

You can find a whole slew of these vines and Instagram videos at Buzzfeed. Not surprisingly, King James has yet to offer any public recognition of the trend.