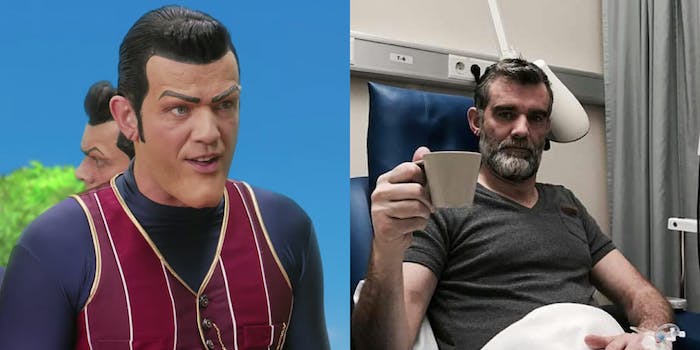 Stefánsson, known for playing villain Robbie Rotten on early 2000s children’s show LazyTown, revealed in 2017 that he was diagnosed with stage 4 bile duct cancer. He had battled the disease for two years before his announcement.

Stefánsson underwent a successful surgery last June, which removed metastases from his body. Unfortunately, the cancer returned in 2018 and was inoperable, according to TMZ.

rest in peace Stefán Karl. You will always be no. 1 pic.twitter.com/KlMc4ZIqpZ

Stefánsson was beloved in the meme community, particularly on Reddit, for his Robbie Rotten role. The character’s theme song “We Are Number One” was named “Meme of the Year” by r/dankmemes in 2016.

The r/dankmemes subreddit, where users post surreal and unusual memes, is paying its respects to Stefánsson with memes dedicated to the actor for 24 hours. “Other memes will be removed,” wrote one of the subreddit’s moderators, sloth_on_meth.

“Stefan, we want to thank you for all the amusement you gave us,” read another post by sloth_on_meth. “We would also like to thank you for your positive outlook. Until the end, you kept your head up, and lived your life. We hope you’re doing great up there. You are number one.”

“It’s not until they tell you you’re going to die soon that you realize how short life is,” Stefánsson reportedly tweeted in March after revealing the return of his cancer. “Time is the most valuable thing in life because it never comes back. And whether you spend it in the arms of a loved one or alone in a prison-cell, life is what you make of it. Dream big.”