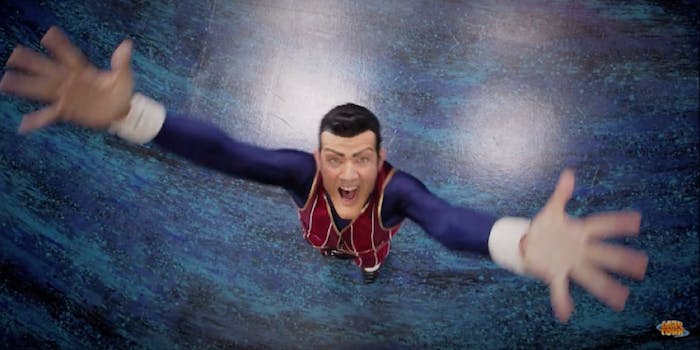 He is number one!

Earlier this year, actor Stefan Karl Stefánsson, best known for portraying the villain Robbie Rotten on LazyTown, revealed that he had stage 4 bile duct cancer. The prognosis seemed bleak, and his wife wrote on Facebook that “his life expectancy is unfortunately significantly reduced.” This week, though, the actor shared some good news: After a successful surgery in June, where doctors removed three tumors from his liver, his body is free of metastases. The cancer could still come back, he said, but it’s gone for now.

“I have been asked by hundreds of people tonight if it’s true that I’m free of cancer,” Stefan Karl Stefánsson wrote on his GoFundMe page, ” This is one of those questions I don’t really know how to answer — but am I free of getting another metastasis? That we will not know in the coming weeks or months, that’s just how Cholangiocarcinoma of Bile Duct cancer works, you simply don’t know. I’m free of any cancer metastases right now after undergoing a very successful liver surgery in June this year performed by one of the best liver surgery team in the world.”

Stefánsson was diagnosed with pancreatic cancer in 2016. After surgery and chemotherapy, it seemed he had beaten it. But when he went to what was supposed to be his final check-up in June 2017, doctors discovered new tumors on his liver. He was diagnosed with stage 4 Cholangiocarcinoma, a bile duct cancer.

The five-year survival rate for stage 4 bile cancer is 2 percent, according to the American Cancer Society, but Stefánsson is optimistic.

“I don’t look at it like I received some death sentence even though I know that everything past the next two years of my life is a miracle. I look at it like we should be creating memories,” he told RÚV. He added that he’s been spending time with his wife and kids and cycling 20 kilometers a day. He credits exercise for his quick recovery from the surgery—which is ironic, given that his character wants to keep Lazy Town lazy.

“I’m NOT free of the danger yet – but I’m free of the metastases,” he wrote on GoFundMe. “I have refused any further adjuvant therapy, chemo or radiation, since there is less than 3% chance of it making any difference, but more likely it will make me more and more sick. So, if it comes back, if we are looking at another metastases, we will try surgery or nothing at all.”

In the meantime, though, he’s still acting. He’ll do 10 performances of “Stones in His Pocket” this month at Iceland’s National Theater, and he told RÚV he’s writing his first standup comedy routine. It’s about cancer.

“We’re gonna start testing it in October and then I’ll premiere it soon after New Years. I’m gonna make some fun of this,” he said.

The internet meme community that idolizes Stefánsson and Robbie Rotten is overjoyed to hear he’s doing better. YouTube mashup artist Grandayy, one of Robbie’s biggest fans, has been spreading the good news.

“[I]t’s still very good news and it means that there’s good progress. Really happy for Stefan and as he says in the inetrview, life is now!” Grandayy wrote on Twitter, where his icon and header image are both pictures of Robbie.

A translation of the RÚV interview, by redditor batteries-included, was one of the biggest posts on Reddit Sunday. The Dank Memes subreddit, which has been incredibly supportive of Stefánsson through memes and donations, declared Aug. 13 an official meme holiday—”We Are Number One Day.” (“We Are Number One” is Robbie Rotten’s signature song in LazyTown.)

Let’s hope Stefan Karl Stefánsson is around for many more We Are Number One Days to come!