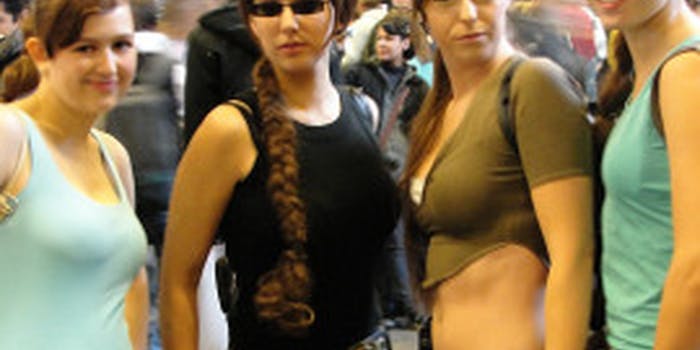 Meagan Marie, a cosplayer who organized an event at the popular geek con, brought a harassment incident to light on her blog.

The subject of harassment at geek cons, be they sci-fi, gaming, or tech, is a controversial one, as the recent story of Adria Richards has made all too clear. But even cons that do their best to enforce a safe space may have their hands tied when the problems arise from the media covering the event.

That’s the lesson one cosplayer learned at last year’s NY Comic Con; and at last weekend’s PAX East, a group of Lara Croft cosplayers got a crash course in media harassment from one very rude journalist.

The Mary Sue reported last week that during a cosplay event organized by Tomb Raider developer Crystal Dynamics, a journalist rudely questioned the Lara Croft roleplayers and then “used the ‘Cosplay is consent’ argument” before being banned by the conference along with his entire media outlet.

According to reports from a cosplayer and the event organizer Meagan Marie, who blogged about the incident, the journalist was filming when he approached the group and asked them if he could photograph them.

Then he asked them what it was like to be at a conference where none of the men could please them in bed.

The question, part of a gag borrowed from Triumph the Insult Comic Dog, shocked the cosplayers. But when Marie confronted the journalist, he got testy. She wrote,

I attempted to calm myself down before walking towards him and the cameraman, and expressing that it was rude and unprofessional to assume that these young women were comfortable discussing sexual matters on camera. I intended to leave the conversation at that, but his subsequent response escalated matters quickly and clearly illustrated that this ran much deeper than a poor attempt at humor. He proceeded to tell me that “I was one of those oversensitive feminists” and that “the girls were dressing sexy, so they were asking for it.” Yes, he pulled the “cosplay is consent” card.

At this point, as he snaked off into the crowd muttering angrily at me, I was livid.

Marie alerted conference officials to the incident. PAX organizers told The Mary Sue that they had contacted the journalist and his media outlet and informed them they were no longer welcome at the con:

Our media guests are expected to behave in a professional manner, and it was clear to us this particular individual crossed that line. We got in touch with the outlet and the individual during the show, and that particular journalist is no longer welcome at PAX. We want everyone at PAX to feel welcome and comfortable, and that includes those that staff the booths.

As one of the real-life offshoots of popular webcomic and gaming community cornerstone Penny Arcade, PAX East is known for banning controversial “booth babes” from the con floor, and implementing “Enforcers” to police the convention to ensure that con-goers have frequent support around them in case of dangerous situations. But while PAX has a weapons policy, it has no anti-harassment policy, and adheres to its laid back stance by telling attendees to follow Wheaton’s law.

It’s all well and good to tell people, “don’t be a dick;” but as every person who’s ever been groped, harassed, stalked, forcibly kissed, and assaulted in a con environment knows, there are your average convention dicks, and then there are the dickwolves.

So many people have been offended by the Penny Arcade creators’ stance on rape jokes—they have yet to apologize for the 2011 “raped by dickwolves” joke that continues to harshly divide their community—that an attempt at lampshading the controversy with a “dickwolves survivors guide” t-shirt had to be pulled from Penny Arcade stores after upset gamers swore off attending PAX because of it.

The concept of creating anti-harassment policies at cons, be they sci-fi, gaming, or tech cons, is still a controversial subject for many geeks. The policies seek to ensure that no congoer ever has to endure an uncomfortable moment brought on by objectification, physical, or sexual harassment, regardless of what they wear or how they cosplay. They also help eliminate the ‘cosplay is consent’ argument that Marie faced from the journalist, as well as from commenters on her own blog:

“Unfortunately your avatar ruined any positive spin your post could’ve created,” commented one reader to another one, referring to the tiny avatar next to her Disqus comment. “With that kind of picture, should you really be surprised when people objectify you?”

A representative from the media outlet responsible allegedly also showed up in comments that are now deleted, and, according to Marie, made “several other unflattering insinuations” about her appearance.

For Marie, that attitude was the dealbreaker that made her alert the con officials.  “I get that it was intended to be a joke,” she wrote in an update to her blog post, “but I don’t think it was funny, or appropriate, especially considering how young some of the cosplayers were.”

To be honest, I wouldn’t have taken the issue to PAX if the press member had apologized after I told him it was rude [and] unprofessional. What caused me to take it to PAX was the subsequent comments, especially the “they are dressed sexy, so they are asking for it” line. I see that as a very dangerous way of thinking for a professional to hold at a convention.

She also stressed that PAX had “handled the situation with flying colors,” and that dickwolves aside, her point was larger than a single convention. “This is a problem in our industry,” she said.

Neither Marie nor Mandy Caruso, the Black Cat cosplayer who was sexually harassed on film at last year’s New York Comic Con, chose to “out” the media outlets responsible for their harassment.

But as the pressure grows to make cons even safer spaces for women, whether in or out of costume, it will hopefully grow increasingly hard for media outlets to get free passes to be dickwolves.