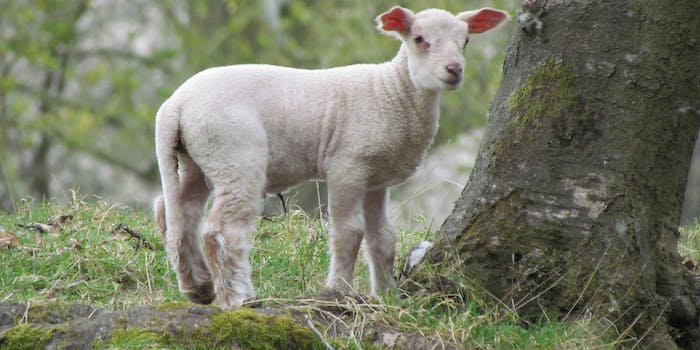 This lamb really *is* picking on someone its own size.

In the latest episode of “Man vs. Wild: Peewee Edition,” we have a rather aggressive lamb bullying the heck out of a small child. While the child’s shrill whines invoke twisted combinations of humor and guilt, we are obliged to give this ferocious lamb props for defying stereotypes presented in fairytales, which wrongfully portray them as sheepish and docile.

Nay, this tough lamb has found the smallest child on the proverbial playground and proved to all the naysayers that it was not one to be fucked with. The video reaches its crescendo as the unathletic little boy, dressed in a full tracksuit and armed with a bowl-shaped object, attempts to defend himself. He softly hits the lamb over the head, and the lamb reminds him that if he wants to take on mother nature, he needs to pack more heat.

The lamb rams the boy repeatedly, prompting him to cry and leading his parents—and the Internet—to cackle. It’s by far the funniest duel between little man and little wild that you’ll see this week.

Photo via GrahamPics1/Flickr (CC BY 2.0)