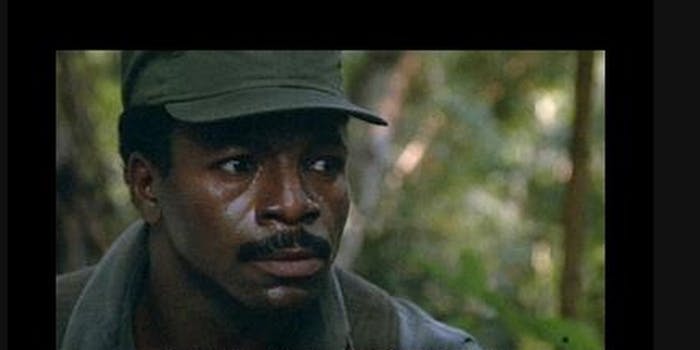 Frustrated by the response to the campaign agaisnt Jospeh Kony, Facebook users are posting a photo of actor Carl Weathers and exuding praise.

Seemingly everyone on the Internet watched a powerful video publicising Joseph Kony, the brutal leader of the Ugandan Lord’s Resistance Army. Some people quickly grew tired of the resulting “slacktivists”—people who think sharing a video amounts to affecting real change.

So they’re using their Facebook friends’ newfound passion against them by posting a picture of actor Carl Weathers from the movie Predator—where he looks somewhat like Kony—and exuding praise.

One user uploaded a picture of Weathers with the caption “Watched the video/Dude is my homeboy.”

“you’re a fucking douche for trying to support what he is doing,” responded one of his friends.

Another posted the Weathers photo to his Facebook wall with the words “my hero.”

“I don’t appreciate this,” responded one of his friends. “I seen the 30 minute video[…]if 1 american was treated this way we would go crazy.”

The prank, thought to originate from an anonymous 4chan user, would be easy to fake. But a search through youropenbook.org reveals that indeed, multiple people are falling for it.

Screengrabs of users successfully pranking friends has become a trend in Reddit’s r/funny, where at least three instances of it are among the top posts.

“In their defense, [Weathers] IS kind of a dick in the movie,” wrote redditor cited.