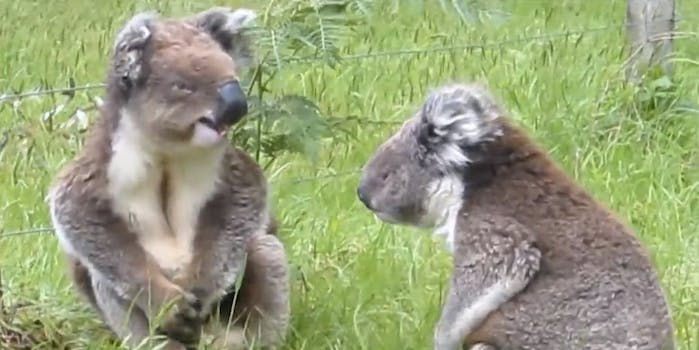 You’ll want to watch these koalas bicker all day

These marsupials don't fight dirty, but they do fight loudly.

The general assumption is that koalas are cute and cuddly creatures, so a video of two marsupials having a noisy fight is simulaneously shocking and delightful.

Did you even remember that koalas make noises? We bet not. So that already ratchets up the discomfort level of watching this pair of koalas whine at each other. They also shove each other during their fight, while continuing to make adorable WTF faces at each other. Or at least we’re interpreting them as WTF. They could also just be how koalas look all the time.

Even the guy filming can’t help but turn the camera to get his own amused/horrified reaction on screen.

We don’t know which of the koalas won the fight, but we do know we’ve lost hours to this clip on repeat.