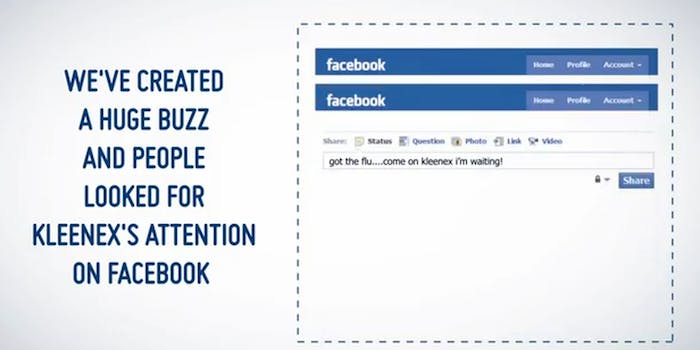 Was your latest Facebook status update about feeling under the weather? You may be receiving a care package from Kleenex.

Kleenex just epitomized the word “servicey” with its new Facebook campaign in Israel.

The tissue company scanned people’s Facebook statuses looking for people who were sick and suffering from the sniffles. It located 50 Facebook users and sent them care packages full of tissues, blankets, and other assorted get well items. Aw!

While not the first creative Facebook campaign of the holiday season, it was certainly a thoughtful gesture. But where’s the privacy? What’s next—Trojon condoms hand-delivered after changing your relationship status?

In this case, Kleenex received approval from the users’ Facebook friends, who passed on the necessary addresses. And, all of the winners posted pictures of the kit to their Facebook wall, according to the video produced by the ad firm behind the campaign. Some people even began changing their statuses to attract Kleenex’s attention so they would receive a kit.

While our Hebrew failed us and we couldn’t track down a lucky winner, the campaign created a measurable buzz with more than 1,800 interactions.

Someone should turn Kleenex onto the Facebook’ group Find a Pox Party Near You.