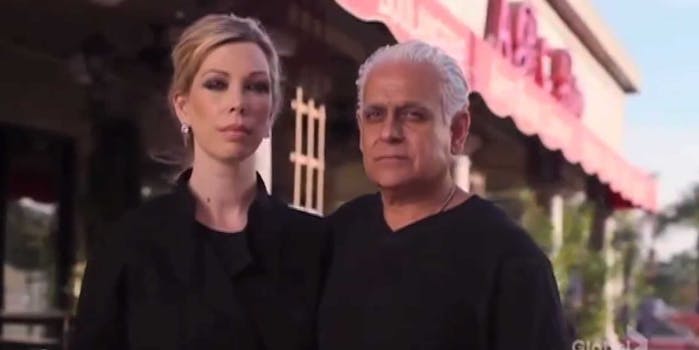 After “Kitchen Nightmares,” Amy’s Bakery gets a NSFW parody

The 90-second ad splices footage from the show with profanity-laden voiceovers.

The Internet is not done making fun of Amy and Samy Bouzaglo.

Nearly a week has gone by since the two extremely disagreeable figures were featured on Kitchen Nightmares, a reality show in which celebrity show Gordon Ramsey goes into a flailing restaurant and helps turn their luck around.

In their television appearance, the Bouzaglos—owners of a restaurant in Scottsdale, Ariz., called Amy’s Bakery and Cafe—came across as petty, delusional, psychotic, and whatever other negative adjective you can think of. In the episode, the couple cursed out and threatened their customers and employees. Their behavior was so deplorable that Chef Ramsey walked away from the restaurant because he felt like there was nothing he could do for them.

Not content with ridiculing themselves on national television, the Bouzaglos took their circus act to Facebook, where they proceeded to hurl a slew of tirades blasting Yelpers, Reddit users, and anyone who didn’t think that they were God’s gift to humanity. A day later, Samy and Amy would go on to claim that their account was hacked.

You would think that the Internet would get tired of the “Ballad of Samy and Amy” by now, but you’d be very, very wrong. The Internet doesn’t let go of a dead horse (or horsey dance) until every drop of blood has been thoroughly beaten out of it, and this particular equus is still good for another good whacking or two.

That’s where the following parody commercial comes in.

The video—entitled “Amy’s Baking Company Commercial (NSFW)” and uploaded to YouTube by Blast Radius Comedy—is a minute-and-a-half clip that splices together footage of the Kitchen Nightmares episode with a voiceover that mocks the delusional couple. Much like Amy and Samy, the mimicking voiceovers are laden with profanities that would make a sailor blush.

Currently, the video is stuck at 301 views, which is usually a sign that it’s going to become a viral sensation.