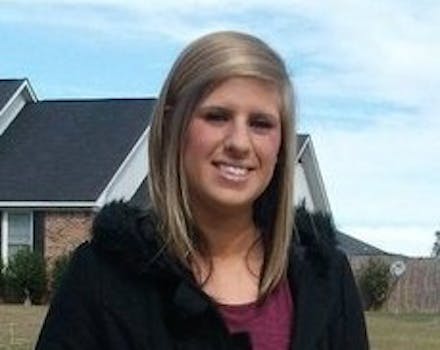 Kimberly Holland, 24, has been let go from her job after reportedly admitting to having a romantic relationship with 18-year-old Daniel Parnell, one of the three teens charged in last year’s shooting death of Summer Moody.

There’s been yet another twist in an Alabama case that’s sparked debates about the felony murder rule, juvenile justice, and gun ownership.

Baldwin County, Ala., corrections officer Kimberly Holland, 24, has been let go from her job after reportedly admitting to having a romantic relationship with 18-year-old Daniel Parnell, one of the three teens charged in last year’s shooting death of Summer Moody.

In April 2012, four Alabama teens–Parnell, Moody, her boyfriend Scott Byrd and Dylan Tyree–went to Gravine Island in the Tensaw river delta, where they allegedly broke into cabins. Three men who were on the island took notice of the teens, and one of them, authorities say, fired what was meant to be a warning shot. The bullet hit Moody, 17, in the head. She died ten days later.

Parnell, Byrd and Tyree were all charged with murder in Moody’s death under Alabama’s felony murder rule, which states that when, during the commission of a felony, a person dies, the perpetrators of the felony are also guilty of murder. The teens were also charged with first-degree burglary. None of the three campers, Larry Dean Duncan Jr, William Hearn and Lonnie Davison, were charged, despite the fact that Duncan and Hearn have felony records and are prohibited from owning firearms under federal law.

An inmate at the jail reported in March that while Parnell was behind bars, he and Holland were engaged in an“ongoing relationship,” and that Holland may have brought him contraband. Parnell (pictured right) was jailed from the time of his November 2012 arrest until January 18, when he was freed on bond. Holland was placed on administrative leave following an interview with internal investigators during which she admitted to the relationship. The Baldwin County Sheriff’s Corrections Command prohibits officers from fraternizing with, or doing favors for inmates. Holland will not face criminal charges.

Holland’s Facebook page shows that she updated her relationship status to “Engaged” on Jan. 10, a week before Parnell was freed on bond, and to “Married” on April 4. She also changed her name to Kim Holland-Parnell and uploaded a photo of Parnell on a boat. There are no photos of them together and they are not Facebook friends. The photo she posted was taken from his profile. A look through her Facebook timeline shows that Holland has a habit of changing her relationship status to “Engaged” or “Married” fairly frequently.

In February, Byrd and Parnell were granted youthful offender status, which means their cases will be sealed and they will serve no more than three years in this case. Tyree also filed for youthful offender status. The three young men are still facing other charges relating to other burglaries and the alleged beating of Stephen Baker, another teen who’d had a falling out with the group.

After her death, Moody’s parents filed a $1 million lawsuit against Duncan, Hearn and Davidson, as well as the owner of a nearby campsite and the Alabama Marine Police.