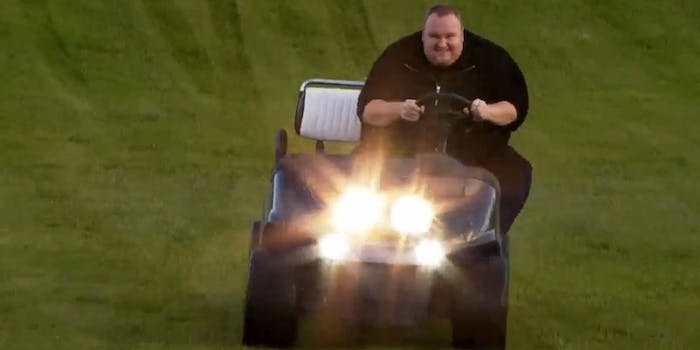 Watch Hollywood's Most Wanted grin like a maniac as he flies down a hill on four tiny wheels.

Call Web entrepreneur Kim Dotcom what you will—hero, genius, criminal, charlatan—but the man knows how to have a damn good time on a golf cart.

The founder of file storage site Mega tweeted a gif of himself Sunday in which he barrels down a hill, grinning like a maniac and nearly spilling out of his tiny vehicle.

“My wife just saw me on TV, speeding with my tuned golf buggy & she hit me. She’s right. I need to grow up haha ;-),” he posted to Twitter.

The footage comes from a Der Spiegel video special on Dotcom, released Sunday and conducted in his native German tongue. Amazingly, the special has yet more footage of him riding his cart with an uncomfortable-looking reporter in the passenger seat.

Dotcom’s had a long love affair with going fast on four wheels. In April 2012, he posted a YouTube video of himself racing on Germany’s famous Nürburgring Nordschleife track.