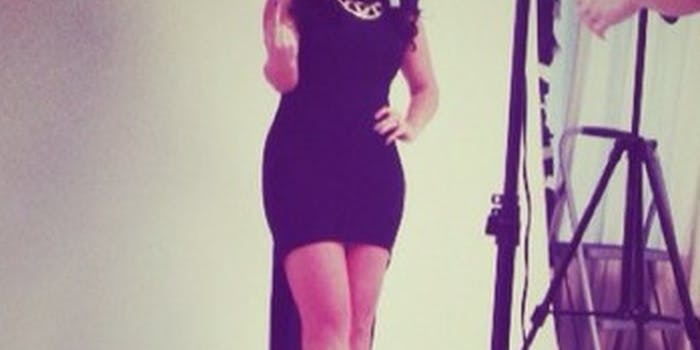 Not even Kickstarter can help this “Jersey Shore” castaway

For $500, Angelina Pivarnick will have Skype session with you, she'll call you, tweet at you, and even send you a signed photo of her.

Former Jersey Shore cast member Angelina Pivarnick is hoping to reset the 15-minutes-of-fame timer, and she turned to Kickstarter to do it.

Pivarnick, known by the less than flattering moniker “Trash Bags,” was one of the original cast members before she was kicked off the show three episodes into the first season. She was then brought back for 10 episodes of season 2 before once again getting the boot.

As Gawker noted back in 2010, Pivarnick spent her post-Jersey Shore days telling anyone who would listen to her—or pay her—about how the reality television show ruined her life. And when MTV executives announced that the program would end after its sixth season, Trash Bags was the first to tell the world that she was glad it was ending.

But now Pivarnick wants back in on the celebreality game. On Feb. 24, she launched a Kickstarter campaign in hopes of raising $8,000 to fund the pilot episode of her new show, aptly titled The Comeback.

“This pilot will be the starting point of her new series which will give Angelina a fresh start,” Pivarnick’s Kickstarter page reads, “as well as entertain the nation as we watch a more relatable Angelina better her reputation while empathizing with both her fans and her haters.”

And what kind of crazy hijinks will we get to see on The Comeback. For starters, it “will focus around Angelina as we watch her go through several challenges with help and guidance from her team.” Such challenges include, but are not limited to, shopping at Costco with sunglasses on and the Herculean task of keeping her car clean.

Upon completing the pilot episode, Trash Bags will shop her new program around.

To entice her many fans—she has more than 133,000 followers on Twitter—Pivarnick is offering rewards like a free download of a song she claims is a hit called “Serendipity” and a thank you tweet. All of that could be yours for the low price of $10.

Feeling even more generous? For $500, Trash Bags will have Skype session with you, she’ll call you, tweet at you, and even send you a signed photo of her.

Despite all the cool perks, the former Jersey Shore member has only managed to raise $3,721 from 39 backers. With two days left in her campaign, it looks like the world will be devoid of yet another reality television program and Pivarnick will be denied a second chance at being mildly relevant.