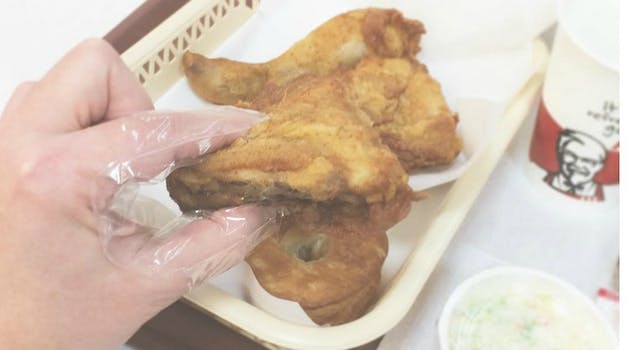 I guess it's not finger lickin' good?

Despite the fact KFC’s famous slogan proclaimed its fried chicken to be “finger lickin’ good,” that doesn’t have to be the case if you’re chowing down on Col. Sanders’s fast food while in Japan.

That’s because KFC announced, (via Mashable), that it’s introducing two-finger gloves to keep its eaters’ digits free of grease as they clean their plates. KFC might call them finger nups (as in “napkins”), but we call them chicken finger condoms.

According to KFC, the nups were inspired by customer feedback, and on a test basis, it’ll provide the poultry protectors in about 20 percent of its 1,000 restaurants in Japan.

Honestly, the finger condoms are a great idea for those who eat fried chicken while working at the computer or those who shovel it into their mouths immediately before using power tools that can easily slip from your grip.

But half the fun of eating KFC is to lick your fingers afterward and have it be perfectly acceptable.