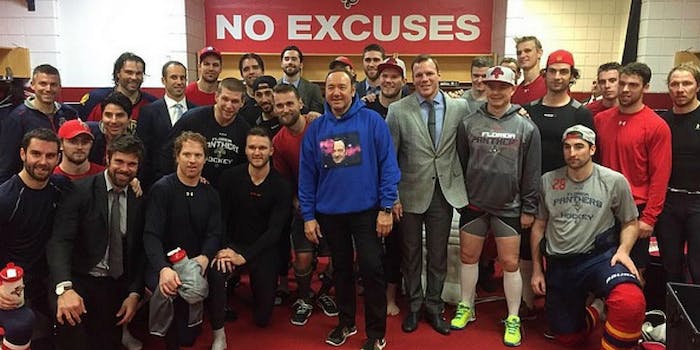 Kevin Spacey knows something you don't.

Ever since the end of 2015, the NHL’s Florida Panthers have been giving out a prize that some would call meaningless and confusing but others would say exemplifies power and fashion sense.

It’s a sweatshirt featuring the head of actor Kevin Spacey floating in space.

How this unusual item came to exist at all—let alone as a trophy—has been a closely guarded mystery. That doesn’t make it any less bizarrely awesome.

In any event, Spacey is on board, as he proved last weekend, when, during the Panthers’ “Spacey in Space” night vs. the Detroit Red Wings, Spacey actually showed up to the game.

Great reveal, by the way. See, the organization, as part of the promotion, passed out cardboard cutouts of Spacey’s face. Which gave Spacey the disguise for when the camera panned over to him. Then the Oscar-winner tossed away the mask to big applause.

Sadly, though, Spacey was not a good-luck charm. The Panthers lost that night.

“He came in after [and] we said hi to him,” Panthers forward Nick Bjugstad said, via CBC.ca. “It wasn’t as fun as if we would have won, the environment in the locker room. We’re down a little bit. We definitely appreciate him coming down, supporting the team.”

Either way, it looks like Spacey (and his disembodied head) had plenty of fun.